Home Business Jerome Powell And The Interest Rate Forecast: Yes, They Are Going Up 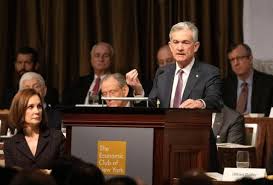 Wall Street enjoyed Federal Reserve Chairman Powell’s hint that maybe interest rates would not be pushed up too forcefully. Stock market bulls misunderstand the Fed’s likely course, in any case, since they misunderstand how the Fed will act in the continually-strong economy. Those interest rate hikes are coming in spite of Jerome Powell’s recent remarks.

The wrong view of the Fed is consistently advanced by some market pundits: that they Fed has a definitive plan, and we should parse their every adjective and adverb to understand what that plan is. In Jerome Powell’s recent speech, he said “Interest rates are still low by historical standards, and they remain just below the broad range of estimates of the level that would be neutral for the economy….” Previous remarks had been interpreted as indicating that interest rates were well below normal. If the chairman now thinks rates are “just below” normal, the market doesn’t expect much tightening.

My view: the Fed’s actions will be data-dependent. Powell again from that recent speech: “… there is no preset policy path. We will be paying very close attention to what incoming economic and financial data are telling us. As always, our decisions on monetary policy will be designed to keep the economy on track in light of the changing outlook for jobs and inflation.”

This view is more complex than it may appear at first. It makes interest rates endogenous rather than exogenous. The exogenous view is that interest rates are given to us by a pooka, the mythological creature that may deliver good fortune or bad depending on a whim. Higher interest rates are bad, of course, and lower rates are good. President Trump wants the Fed to be a good pooka.

The endogenous says there is no pooka. The Fed pushes interest rates up when the economy grows above its long-term potential growth rate. Higher rates may slow economic growth below what it otherwise would be, but the economy is still growing at a good pace.

To forecast interest rates with this view, we begin with an economic forecast. My model continues to put real GDP growth around 2.7 percent next year and into 2020. It could be stronger, over three percent,  but my supply side economic model says we don’t have enough labor and productivity for faster growth.

When demand is trying to grow faster than supply, then inflationary pressure increases. With labor in short supply, wages will rise. Companies that use mark-up pricing will say they are just responding to costs, but it’s really demand pressure pulling prices up. Other companies will shift production to high-margin products, away from low-margin products, which will also push average prices up.

The Fed will observe continued tight labor markets and rising prices and will decide to raise rates. Even if Powell believes that current rates are now a bit below neutral, rising inflation will lead him to push interest rates up.

My forecast for interest rates remains higher than the Fed’s September 2018 forecast. I expect the Fed Funds rate to end 2019 at 3.9%, and to end 2020 at 4.5%. The Fed will make a decision on another rate hike at their meeting of December 18-19, 2018, and will release more detail on their projections for the coming years. Information will be available from the Fed that afternoon (or late morning for those of us on the West Coast).

Hackers can bring ships and planes to a grinding halt. And it could become much more common

Home sweet hodl: How a Bitcoiner used BTC to buy his mom a house