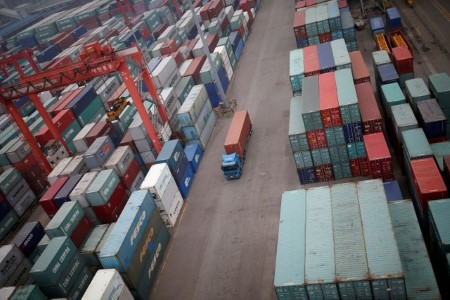 SEOUL, Oct 28 (Reuters) – South Korean exports are set for a 12th consecutive month of growth in October, a Reuters poll showed on Thursday, while inflation for the month will likely increase at its fastest pace in nearly a decade due to surging energy and commodities prices.

Outbound shipments were seen growing 27.0% year-on-year, according to the median forecast in a poll of 14 economists, much faster than the 16.7% recorded in September.

“Exports were still supported by semiconductor demand, but the lack of (even) further acceleration might be evidence of supply bottlenecks,” said Oh Suk-tae of Societe Generale.

Data from last week showed exports for the first 20 days of October surged 36.1% from the same period a year earlier, with those of semiconductors and petroleum products soaring 23.9% and 128.7% respectively.

Overall exports to major trading partners also continued to expand over Oct. 1-20, with those to China, the United States and European Union rising 30.9%, 37.1% and 42.1% respectively.

Economists in Thursday’s poll also saw South Korea’s total imports growing 40.1% year-on-year in October. That would compare with 31.0% in September.

“We expect a decline in the trade surplus in October mainly due to a rise in imports … as the recent surge in energy prices probably supported imports,” Oh said.

In the same Reuters poll, 12 economists projected consumer price index (CPI) this month to jump 3.2% from a year earlier, the fastest rise since January 2012 and greater than September’s 2.5%.

“Consumer inflation would have risen on soaring energy prices … and low base last year due to the government’s subsidies on phone bills,” said economist Park Sung-woo at DB Financial Investment.

“Despite the oil tax cut, the fourth quarter CPI growth will remain high on upside pressures on energy prices during the winter season,” he said.

Some 17 economists also estimated industrial output in September shrank a median 0.7% from August.