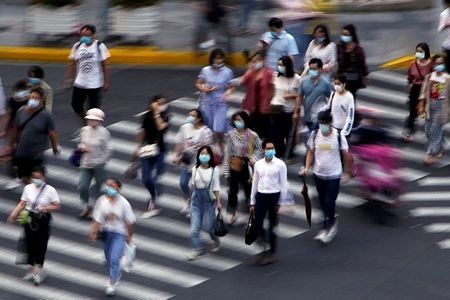 BEIJING, Oct 13 (Reuters) – China’s economic growth is likely to slow to 5.5% in 2022 from an expected expansion of 8.2% this year, a Reuters poll showed, but the central bank could remain cautious about monetary easing due to worries over high debt and property risks.

Gross domestic product (GDP) in the third quarter likely grew 5.2% from a year earlier, slowing from 7.9% in April-June, as power shortages and supply bottlenecks hurt factories while sporadic COVID-19 outbreaks weighed on consumption, according to the median forecasts of 56 economists polled by Reuters.

The world’s second-largest economy has rebounded from the pandemic but there are signs of a slowdown. Problems including falling factory activity, persistently soft consumption and a slowing property sector have dimmed China’s economic outlook.

However, the country’s export growth surprisingly accelerated in September, as still solid global demand offset some of the pressures on the economy.

The People’s Bank of China last eased its requirements on how much cash banks should hold in mid-July, just before a surge in domestic COVID-19 cases.

On a quarterly basis, growth is forecast to ease to 0.5% in July-September from 1.3% in the second quarter, the poll showed.

Economists in the poll expected the economy to expand 8.2% this year, slower than an 8.6% rise in July’s forecast but would still be the highest annual growth in a decade. The economy expanded 2.3% in pandemic-hit 2020.

China has set an annual GDP growth target at above 6% this year, below analysts’ expectations, giving policymakers more room to cope with uncertainties.

Signs of further slowing in the economy could put pressure on the PBOC to ease policy, but analysts said concerns over debt and property bubble risks may delay any meaningful steps, analysts said. Consumer inflation remains benign but soaring producer prices could be a headache for the central bank, they said.

Analysts expect China will keep its one-year loan prime rate (LPR) steady at 3.85% until June 2022. The LPR has remained unchanged since May 2020.

Data from the finance ministry showed local governments issued a net 1.84 trillion yuan ($285.6 billion) in special bonds in January-August, accounting for about half of the annual quota.

(For other stories from the Reuters global economic poll )

(Polling by Md. Manzer Hussain and Devayani Sathyan in Bengaluru and Jing Wang in Shangha; Reporting by Kevin Yao; Editing by Jacqueline Wong)

What To Invest In Right Now? 4 Fintech Stocks For Your Watchlist