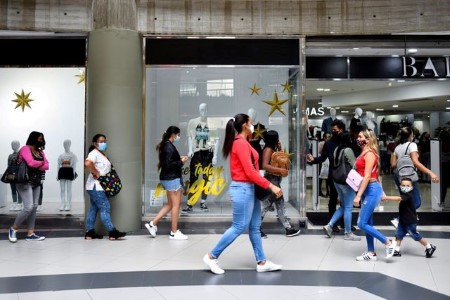 LONDON, Dec 1 (Reuters) – Omicron won’t stop investors betting on a post-pandemic world but it delays the ‘all clear’ – possibly dampening the worst of the winter inflation scare and avoiding reflex policy reactions.

Just as the Federal Reserve and major central banks start to acknowledge that rising inflation may no longer be transitory, this new COVID-19 variant ‘of concern’ to the World Health Organization burst onto headlines last week.

It’s been enough to send equity, energy, interest rate and currency markets gyrating into the final month of the year as it bamboozles the timing of market bets on the year ahead.

Some of the outsize reaction may owe much to low volume trading around U.S. holidays or even month-end squaring. And the surprise certainly spooked stretched speculative positions.

But markets are now keenly focussed on whether the new Omicron variant will require a reformulation of vaccines – which developers reckon could take at least three months.

If more stringent social and travel restrictions are required in the interim, then economic signals may be distorted well into 2022 – forcing monetary policymakers to hesitate on any decision making while assessing whether it will weaken energy and service sector price aggravators or exaggerate supply chain and labour market bottlenecks propping goods prices.

And parsing which central bank blinks or not may be harder still.

Markets flailed again on Tuesday as Fed chair Jerome Powell seemingly trotted out a pre-Omicron assessment of the Fed trajectory – preferring not to add the impact of the new variant to forecasts until accelerated tapering of its bond buying is discussed at the next policy meeting on Dec 14-15.

Will they see it differently by then? No one is quite sure.

In the space of just three trading days, U.S. money markets have ricocheted from pricing the first Fed rate hike as soon as May mid last week, out to as late as September by Tuesday morning, and then all the way back to June since Powell spoke.

But a hawkish direction may end up chasing inflation lower – with an aim of forcing it to settle lower, but now with massive additional uncertainties on timing.

Although headline inflation has raced to multi-decade highs in the U.S. and Europe through November, the worst of the annual base-effects exaggerating that were already peaking out. The 15% lunge in world oil prices triggered by the spread of omicron will amplify that considerably over the coming months.

Year-on-year gains in Brent crude price, important for headline inflation readings, peaked at 126% on November 1. Together with the base effects from last year, that annual gain has been crushed to less than 50% in less than a month.

Even if oil doesn’t fall any further and stays where it is now until March – that annual energy pulse will turn negative.

Oil is just one important input, of course, and price rises are spread more broadly – a factor prompting Federal Reserve Chief Jerome Powell’s hawkish tilt against inflation on Tuesday and nod to faster tapering of its bond-buying stimulus.

But wider commodity price indices are also rolling over and the core Thomson Reuters Commodity Research Bureau index staged its biggest one-day drop since the pandemic hit on the Friday Omicron was named, and it has fallen further since. World shipping prices had already halved from October’s peaks.

The timing is also striking as U.S. and European headline inflation rates at their fastest in decades – though higher and more persistent than many policymakers or investors assumed earlier in the year – look set to have topped out in November. German consumption tax distortions drop out of annual price basket comparisons from January.

What’s more, so-called ‘second-round effects’ of inflation feeding annual wage rises still seem largely absent in Europe at least. Wages of German unionised employees rose by less than 1% in the third quarter compared to last year – the weakest in more than a decade – while German public sector unions agreed a two-year wage increase this week of just 2.8% – almost half what they asked for and less than half the rate of inflation.

Market inflation expectations have come off the boil too U.S. five-year inflation break-evens dropping almost 40 basis points from their peak in just two weeks to as low as 2.80%. Household surveys continue to show elevated inflation expectations – but these too have started to ebb in United States, the euro zone and Britain over the past month.

And while the Fed turns more hawkish – even though its jury appears out about omicron – other central bankers and investors in other parts of the world are not on the same page.

Even though markets has up to last week assumed the Bank of England would raise interest rates as soon as next month, BoE policymaker Catherine Mann said on Tuesday “It’s premature to … even talk about timing, much less how much.”

European Central Bank officials continue to push back against markets pricing any ECB interest rate rise next year and and ECB Vice President Luis de Guindos said this week the ECB is likely to keep buying bonds through 2022.

Volatile markets are clearly unsure whether an elongated pandemic ups price pressures further or sees us through the worst of a temporary spike. Central banks seem less than sure so far either. It could make for a messy yearend.

“Until we have enough data to answer these questions, we can expect markets to remain volatile,” said Pictet Wealth Management’s Chief Investment Officer César Pérez Ruiz.

One year bond yields for the major economieshttps://tmsnrt.rs/3d2Fv1J

Gaining 8% Over The Last Month, What’s Next For DoorDash Stock?

Altcoin Roundup: Holding Bitcoin? Here’s how to put it to work in DeFi

Looking To A Post-Pandemic Future, Restaurant Chains Place Their Bets On The Drive-Thru