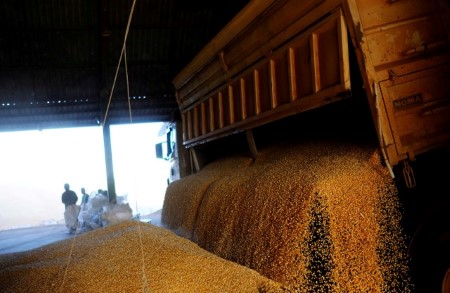 SAO PAULO, May 10 (Reuters) – Brazil will likely produce a record amount of corn in the 2021/2022 cycle, even as dry weather in key states may reduce yields in some parts of the country, according to a Reuters poll with 10 forecasters on Tuesday.

According to the average of forecasts, Brazil will produce a total 115 million tonnes this year, including the first and second corn crops and a third smaller one.

If the projection is confirmed, Brazil’s total corn production will have jumped 32% from the 87.09 million tonnes produced in 2021.

Last season, Brazil’s second corn crop, representing 70%-80% of the country’s entire production in a given year, was hit hard by drought and frost.

The rise in corn production this season is being driven by area expansion of almost 7%, good prices and farmers’ ability to plant their second corn within the ideal climate window, according to analysts.

Despite the positive prospects, things can change before the second corn crop is actually harvested in the middle of the year.

“We believe that yields will be lower in Mato Grosso, as well as in Goiás, Minas Gerais and possibly in Mato Grosso do Sul…”, said AgResource analyst João Pedro Thieme, referring to dry weather affecting Brazil’s second corn crop in those areas.

Yet, any drop in yields will not be nearly as severe as last year’s, Thieme said.

Prudential (PRU) Outpaces Stock Market Gains: What You Should Know

What Can Small Business Owners Look Forward to in 2022?

Biden opens the possibility of more offshore oil drilling in the...