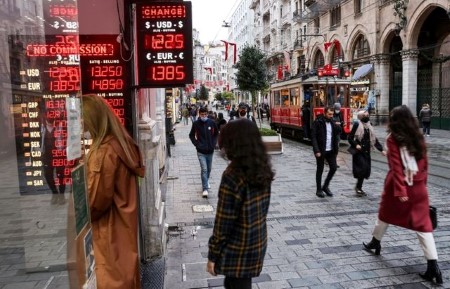 By Orhan Coskun and Jonathan Spicer

ANKARA, Nov 24 (Reuters) – Little stands in the way of Turkey’s currency collapse expanding into a deeper economic crisis after President Tayyip Erdogan ignored appeals, even from within his government, to reverse policy, according to top officials and analysts.

Two people familiar with internal discussions said some government officials are uncomfortable with Erdogan’s rate-cutting strategy and told him this. But they have not convinced him, and others have given up trying, they said.

This could set the stage for an intensifying showdown between rattled investors and local savers on one side and on the other, Erdogan – who has dismissed several ministers and top bureaucrats who previously were able to challenge and persuade him on some policy decisions.

“Some people who wanted to convey the opinion to the president that a different policy should be followed were not successful in this,” said a senior official in the ruling AK Party, requesting anonymity.

“There is a very strict attitude from the presidency that the current practice will continue, interest rates will be kept low and inflation will decrease along with it.”

The presidential office did not immediately respond to a request for comment.

Twice in the last week Erdogan has pledged publicly to see through his battle against high interest rates, dumping fuel on a fire sale of Turkish assets and sending the lira plunging as much as 23% in that period.

Though the currency recouped some losses on Wednesday, anxious Turks say the collapse has upended their family budgets and future plans.

But unlike during 2018’s currency crisis – when the central bank jacked up rates, albeit late, to stem the bleeding – there is little prospect of a quick intervention this time.

“The general view at the presidency is that if this policy continues for a few more months, the process will reverse and the exchange rate will fall … so it appears it will remain in place,” said the second source familiar with internal talks.

“The views of some officials … who do not think these policies are right do not appear to be taken into consideration.”

Goldman Sachs analyst Murat Unur said the risk of dollarisation remains “very high” given the rush to purchase hard currencies, which already account for more than half of Turks’ deposits.

“The current macroeconomic policy mix is not sustainable but the authorities have clearly shown that they prefer low rates and are willing to implement them even if this leads to significant pressure on the lira,” he said in a note.

Erdogan has long espoused the unorthodox view that high interest rates cause inflation and has promised to prove the doubters wrong in what he calls an “economic war of independence” ahead of elections in 2023.

To test his theory, Erdogan has overhauled the central bank leadership and pressed it to slash the policy rate by 400 basis points since September, to 15%, despite inflation running near 20% – and much higher for basic goods like food.

Some of those who in the past advised Erdogan have recently criticised the monetary easing that the president says will stoke exports, investment and jobs.

Economists say inflation could blow through 30% unless steps are taken to reverse the currency depreciation, which raises import prices.

But there is no apparent circuit breaker, especially after Erdogan installed a like-minded governor, Sahap Kavcioglu, at the bank in March and fired the last remaining orthodox policymakers last month.

Treasury and Finance Minister Lutfi Elvan, also seen as a moderate, has kept out of the spotlight and there has been speculation he too could be ousted, though the Palace has not commented.

The central bank left the door open for another rate cut next month – a move Erdogan likely still supports.

The central bank, already lacking credibility, said on Tuesday it would only intervene at times of “excessive volatility” – as the lira dove 15% in its second-worst day ever.

Analysts say authorities could redouble efforts to secure foreign currency swap lines from allies, which could help in any necessary interventions given official reserves remain thin.

Up Over 3x From Covid Lows, Is Royal Caribbean Stock Still A Buy?

Texas Man Gets More Than 9 Years in PPP Loan Fraud...