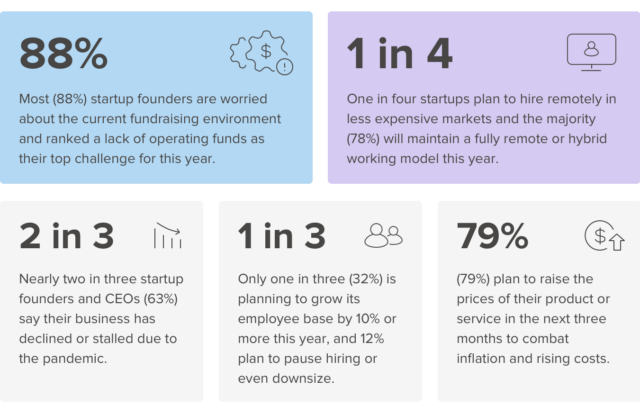 New research published Monday quantifies the growing sense of caution among U.S. startup leaders, as economic turmoil creates concerns about cash, and causes some companies to scale back their hiring plans.

Nearly 88% of more than 250 startup founders and CEOs surveyed by experience management platform Qualtrics’ Delighted subsidiary said they were extremely worried or somewhat worried about the current fundraising environment. Lack of operating cash was cited as the biggest concern, by far, for the current year.

Hiring appears to be taking a hit as a result. Twelve percent of respondents said they expected to pause hiring or reduce the size of their teams this year. About 32% said they planned to grow their employee base by 10% or more, which is considered a small proportion given the fast pace of growth for many startups in recent years.

At the same time, nearly 50% said they planned to boost pay to retain existing employees, and 43% said they would offer larger bonuses to current employees. This is the trend among larger companies, as well, exemplified by Microsoft last week announcing salary and stock compensation changes focused heavily on retaining employees.

Some startup leaders are dealing with the higher costs by focusing at least part of their hiring on lower-cost markets, taking advantage of remote work. One in four survey respondents said they were adopting this strategy.

The survey was conducted between April 6 and April 11, with 152 of the 251 respondents saying they were located in a major U.S. tech hub such as Seattle, Silicon Valley, and New York.

Qualtrics is a publicly traded company with headquarters in Seattle and Provo, Utah.