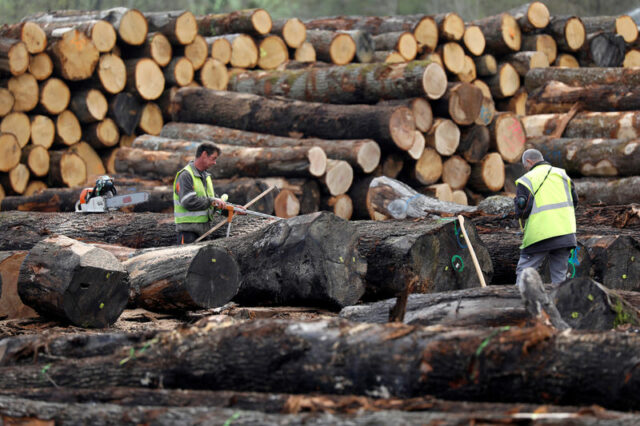 (Reuters) -The United States has decided to almost double the duties on Canadian softwood lumber from most producers to 17.9%, Canadian Trade Minister Mary Ng said on Wednesday, adding that Canada is “extremely disappointed.”

The current rate for most companies is about 9%.

Ng said that the U.S. Department of Commerce on Wednesday issued the final results of the second administrative reviews of its anti-dumping and countervailing duty orders regarding certain softwood lumber products from Canada.

“Canada is extremely disappointed that the United States has decided to increase the unfair duties it is imposing on Canadian softwood lumber from most producers to 17.9%,” Ng said in a statement.

The U.S. Commerce Department and the U.S. Trade Representative’s office did not respond to a request for comment on Wednesday night. Earlier this year, Washington announced plans to double the duties on imports of Canadian lumber and requested a dispute panel on Canada’s dairy import quotas.

Ng said that “following completion of any legal challenges under the Canada-United States-Mexico Agreement’s (CUSMA) Chapter 10 or in U.S. courts, these new anti-dumping and countervailing duty rates will apply retroactively to softwood lumber exports to the United States from companies that were subject to the second administrative reviews.”

“These unjustified duties harm Canadian communities, businesses, and workers,” she said, adding: “They are also a tax on U.S. consumers”.

The lumber duty rate has not been the only issue of contention between Washington and Ottawa in recent months. President Joe Biden, on his first day in office, canceled an oil pipeline from Canada to the United States that Canadian Prime Minister Justin Trudeau supported.

Tesla Falls as Musk Says Hertz Deal Is Not Final Yet By Investing.com