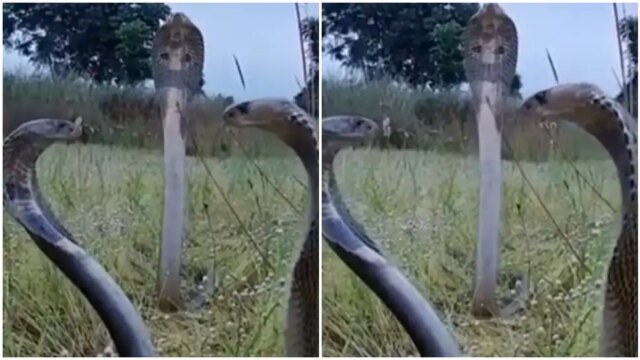 One such video has gone viral on Instagram in which the camera person has recorded three cobras facing each other in one frame. It’s a sight to behold.

A handle called helicopter_yatra has shared the video on Instagram, and its authenticity can’t be independently ascertained, but it’s a nice watch nonetheless.

The three snakes seem to be in a conference, and that prompted the netizens to go for funny captions for the video. While one user called it, ‘pre wedding shoot’, the other said ‘it’s a round table conference’.

Another user said that the referee is ready to decide the winner as the third snake looks at the other two from a distance.

King cobras are mostly found in Southeast Asian jungles and they’re usually 3 to 4 meter long. They’re very venomous but they generally stay away from population.

‘For families on’, Ratan Tata shares the motivation behind launching Nano

Staying away from social media for a week may improve wellbeing: Study

WATCH: Why is Rabada kicking teammate Shikhar Dhawan in THIS hilarious video

One country is home to half of the 10 most expensive Michelin-starred restaurants in...