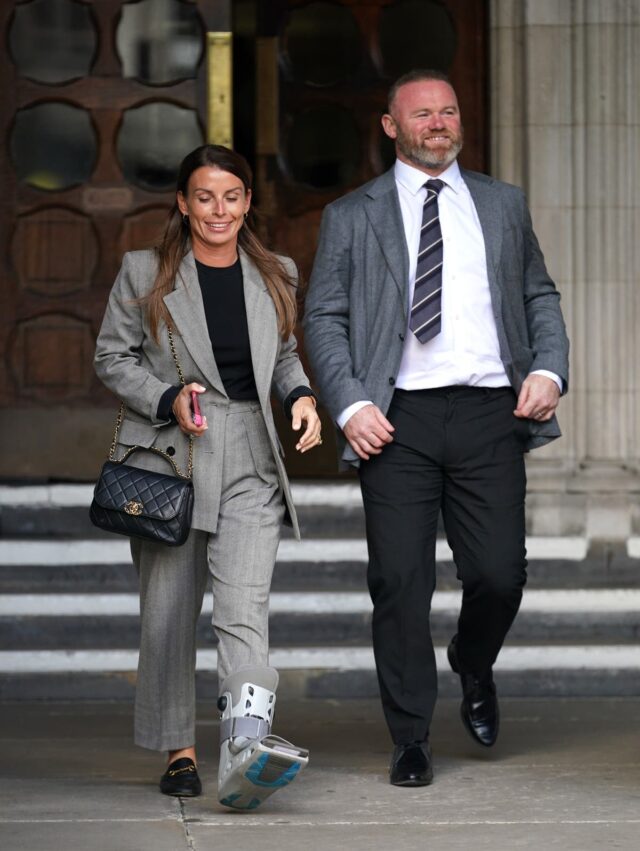 Coleen Rooney has become “a different mother” and “a different wife” since her “reveal” post and Rebekah Vardy’s subsequent libel claim against her, Wayne Rooney told the High Court.

In a viral social media post in October 2019, Mrs Rooney, 36, said she had carried out a “sting operation” and accused Mrs Vardy, 40, of leaking “false stories” about her private life to the press.

Mrs Vardy, who is married to Leicester City striker Jamie Vardy, denies leaking stories to the media and is suing her fellow footballer’s wife for libel, while Mrs Rooney is defending the claim on the basis her post was “substantially true”.

Mr Rooney, a former England captain, has attended court with his wife for the entire trial, sitting in the front row of Court 13 in the Royal Courts of Justice.

On Tuesday, the 36-year-old moved into the witness box to give his evidence to the packed courtroom.

Mr Rooney told the court that the period after his wife’s “reveal” post had been “very traumatic” for her and that he had watched her “really struggle”.

“For me and my wife, we don’t want to be in this court,” Mr Rooney said.

“I’ve watched my wife over the last two and a half years really struggle with everything, becoming a different mother, a different wife.

“It’s been very traumatic for my wife.”

He added: “Hopefully, whatever the judgment is in this case, myself, my wife and our children can get on and live our lives because it was not something that we wanted to be part of.”

The Derby County manager, who has attended each of the six days of the trial so far, also told the court: “it’s been a long week”.

During his evidence on Tuesday, Mr Rooney described watching Mrs Rooney as an “independent woman”, adding he was only made aware of his wife’s so-called “sting operation” when he woke up and saw the “reveal” post in October 2019 while in the US.

Mr Vardy made his first appearance at the trial on Tuesday, sitting beside his wife and in front of their lawyers during the hearing.

Mr Rooney described how he was asked by then England manager, Roy Hodgson, and then assistant manager, Gary Neville, to speak to Mr Vardy to ask his wife to “calm down” during the Euro 2016 tournament.

Mr Rooney said: “They asked me, as captain, would I be able to speak to Mr Vardy on issues regarding his wife and I think we all knew that it was an awkward subject.

Hugh Tomlinson QC, for Mrs Vardy, said: “Ask his wife to calm down? She wasn’t dancing on tables.”

Mr Rooney said he “100%” had the conversation with Mr Vardy but did not know if he then spoke to his wife.

Under questioning from Mr Tomlinson, Mr Rooney also said he did not remember speaking with Mr Vardy to a Sun journalist about their conversation.

“As England captain, I would always try and protect the players in public as much as I could,” Mr Rooney said.

He later added: “Everyone knows the history between Liverpudlians and The Sun newspaper, I have never spoken to a Sun journalist on a personal level.”

Mrs Rooney is defending the libel claim brought by Mrs Vardy on the basis of truth and public interest.

The libel battle comes after Mrs Rooney publicly claimed that an account behind three fake stories in The Sun which she had posted on her personal Instagram account was Mrs Vardy’s.

The fake stories Mrs Rooney planted on her Instagram during the sting operation featured her travelling to Mexico for a “gender selection” procedure, her planning to return to TV, and the basement flooding at her home.