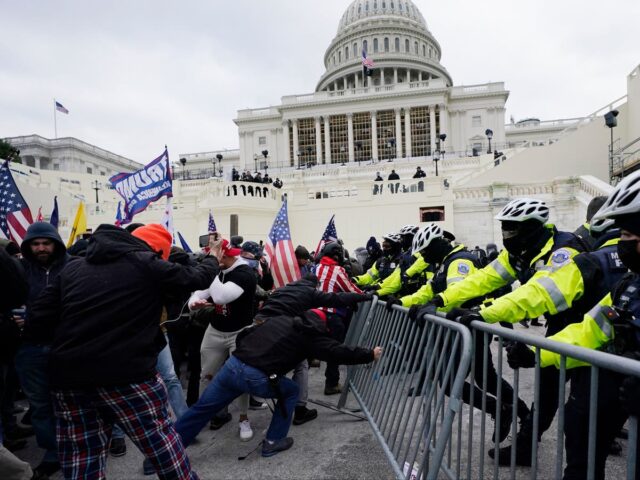 A US Capitol Police officer has been indicted on charges of obstruction of justice after he told a Facebook contact to remove online posts from the insurrection on 6 January.

The indictment states that Michael Riley told a person to remove any social media posts showing that they were present during the riot at the Capitol when a pro-Trump mob laid siege to the building in an effort to prevent Congress from certifying President Joe Biden’s election victory.

Prosecutors say that Mr Riley, who was arrested on Friday, sent a private message to an individual who had posted selfies from 6 January and videos about being in the Capitol. Mr Riley had been in the same Facebook groups focused on fishing as the individual.

“[I’m] a capitol police officer who agrees with your political stance,” Mr Riley allegedly wrote. “Take down the part about being in the building they are currently investigating and everyone who was in the building is going to [be] charged. Just looking out!”

“[I’m] glad you got out of there unscathed We had over 50 officers hurt, some pretty bad,” Mr Riley added.

More than 100 officers ended up being injured on 6 January.

Mr Riler also told the person in the middle of January to “get off of social media”.

“They’re arresting dozens of people a day. Everyone that was in the building, engaged in violent acts, or destruction of property … and they’re all being charged federally with felonies,” he allegedly wrote.

Mr Riley also spoke to the person on the phone, leading the individual to allegedly tell others that they were in contact with “capitol police” and that others should expect charges of trespassing.

According to the chief of US Capitol Police, Tom Manger, Mr Riley has been put on administrative leave.

“Obstruction of Justice is a very serious allegation. The Department was notified about this investigation several weeks ago. Upon his arrest, the officer was placed on administrative leave pending the completion of the case. The USCP’s Office of Professional Responsibility will then open an administrative investigation,” Mr Manger said in a statement, CNN reported.

The indictment said that Mr Riley had worked for the department for 25 years.

On the day of the insurrection, he was working in the K-9 unit. Prosecutors say he wasn’t working inside the Capitol building during the siege, adding that he instead responded to reports of an explosive device on Capitol Hill.

The indictment of Mr Riley didn’t identify the person he spoke to, but the allegations state that the individual was arrested on 19 January and that the FBI asked the person about their communications with Mr Riley.

The indictment adds that Mr Riley deleted his own messages from Facebook on 20 January and that in a final message the next day, he said he was angry at the individual for smoking marijuana in the Capitol and because they were “acting like a moron”.