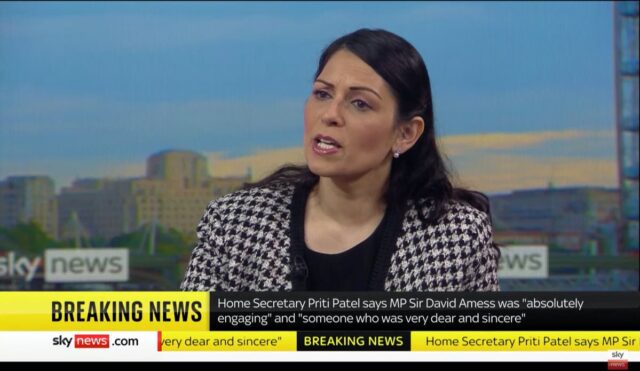 Social media users could face a ban on anonymous accounts, as home secretary Priti Patel steps up action to tackle radicalisation in the wake of the murder of MP Sir David Amess.

Police questioning Ali Harbi Ali on suspicion of terrorism offences are understood to be investigating the possibility that the 25-year-old UK national of Somali background was radicalised by material found on the internet and social media networks during lockdown.

Ali had in the past come into contact with the government’s Prevent deradicalisation programme, but was not considered a significant enough risk to come to the notice of security services.

Investigations are believed so far to have found no evidence of extensive contact with terror groups abroad. His father Harbi Ali Kullane was a former media spokesman for the prime minister of Somalia and had been involved in campaigns against the extremist al-Shabaab group in the east African country.

Diane Abbott, who receives more online abuse than any other MP, gave her backing to legislation forcing tech giants to reveal the identity of those who peddle hate on their platforms.

She told The Independent that police investigations into racial abuse and threats against her had repeatedly foundered because of social media companies’ insistence on protecting anonymity. And she said: “Persons inciting violence and racial hatred online should know that they will no longer have this cover.”

Speaking two days after 69-year-old Sir David was killed in a knife attack at a constituency surgery in his Southend West seat, Ms Patel said she was determined to introduce “big changes” to the law surrounding online hate.

She said many MPs had suffered “appalling” online attacks and warned: “We can’t carry on like this.”

Tech companies are fiercely resisting measures in the government’s draft online safety bill which would require them to provide police and security services access to encrypted messages.

And Ms Patel indicated she is considering going a step further by requiring sites such as Facebook or Twitter to retain details of the identities of people posting material which could be handed over to police investigating crimes.

Asked whether she could introduce legislation to remove the right to online anonymity, Ms Patel told Sky News’s Sunday with Trevor Phillips: “I want us to look at everything and there is work taking place already.

“I spend too much time with communities who have been under attack, who’ve had all sorts of postings put online and it’s a struggle to get those postings taken down. We want to make some big changes on that.”

She later said that any restrictions on anonymity would be “proportionate and balanced”, after shadow foreign secretary Lisa Nandy warned she risked catching pro-democracy campaigners and whistleblowers who have a legitimate right to conceal their identities when exposing wrongdoing online.

“We’ve got to get the balance right, because social media can be an enormous force,” said Ms Nandy. “You’ve got some incredible campaigners – the women of Belarus, the pro-democracy protesters in Hong Kong, the young people of Afghanistan – they’ve managed to use social media in order to make themselves heard.

“And if you speak to Childline they’ll say that social media has been a major problem for a lot of young people, but it’s also been a way in which young people can now reach out and get help in a way that they couldn’t when I was a child.”

But the Labour frontbencher agreed there should be “limits” on the use of anonymous accounts and “repercussions for people engaging in what would be criminal behaviour if it happened in person”.

The development came as shadow justice secretary David Lammy released police records showing that abuse and death threats against him had led to 13 crime reports and four intelligence reports since the beginning of last year.

And speaker of the House of Commons Sir Lindsay Hoyle revealed that he had received a car-bomb threat from a social media account based abroad.

Sir Lindsay told Times Radio that the social media companies “need to get their act together”.

“We should know who is putting things up on social media, we should know the person behind these fake accounts – offshore accounts being used for threats and intimidation,” he said.

“Companies have got one chance. If it was up to me and I was in charge of legislation, I would have done something.”

Sir Lindsay has cleared Commons business on Monday for tributes to Sir David from MPs, including prime minister Boris Johnson.

A minute’s silence in honour of Sir David will be held before proceedings begin, a book of condolences will be opened and MPs will later take part in a service of prayer and remembrance in St Margaret’s Church on Parliament Square. Sir Lindsay confirmed that a plaque bearing Mr Amess’s coat of arms will later be installed in the Commons, as was the case following the murder of Jo Cox in 2016.

During three hours of tributes, MPs from all sides of politics are expected to voice fond memories of the highly popular MP, a veteran of 38 years on the green benches whose untimely and violent death has shaken Westminster. In a mark of respect, Labour and Liberal Democrats have indicated that they will not stand candidates in the by-election to find his replacement.

MPs on Sunday spoke out about their fears for their own safety, with some expressing frustration that threats have not been taken seriously enough by police.

Ms Nandy said she did not feel safe doing her job in her constituency, while Conservative Andrew Rosindell said that he had reported several incidents to police but “quite often they literally don’t do anything”.

Ms Patel confirmed that MPs will be offered a more routine police presence at surgeries and other events in constituencies, and said she was open to the introduction of airport-style metal detectors.

Close protection by plain-clothes officers of the kind provided to the prime minister and home secretary could be extended to more MPs, she said, though aides suggested this was likely to happen only in cases of heightened risk.

Writing in The Independent, Ms Abbott said there may be a case for metal-detecting arches or wands at constituency events, but said she would be “very reluctant” to see police posted outside her advice sessions.

“A number of MPs, including myself, don’t think that bringing the police into contact with people who approach MPs for help is a good idea,” said Ms Abbott. “There are those who are the victims of unjust state actions and have often adopted life strategies to avoid officialdom. I would hate to do anything which deterred my constituents from coming to see me.

“For the type of person who does not follow politics in the broadsheet newspapers or attend public meetings, meeting their MP in person at an advice session is one of the few things that makes politics real to them.”

New Twitter CEO steps from behind the scenes to high profile

The cryptocurrency revolution: How Europe could take the lead in the ‘money of the...