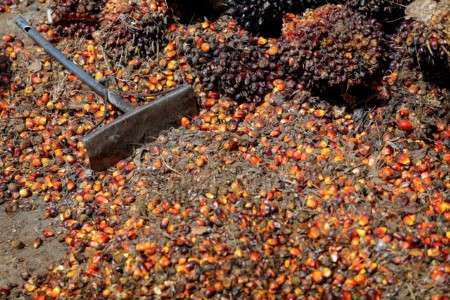 KUALA LUMPUR, June 23 (Reuters) – Malaysian palm oil futures jumped over 5% on Thursday, recouping most of their losses after crashing to a six-month low in the previous session as traders hunted for bargains.

“What we are witnessing today is a mild short-covering amid an overall bearish market,” said Paramalingam Supramaniam, director at Selangor-based brokerage Pelindung Bestari.

Production is picking up pace in both Indonesia and Malaysia, but demand is worrisome, he said, adding that fresh demand will remain slow with the current sell-off.

Production in Malaysia during June 1-20 likely rose 15.9% from the month before, traders said, citing estimates from the Malaysian Palm Oil Association.

Exports from the world’s second-largest producer during the same period nosedived between 10% and 17% on the month, according to cargo surveyors data, and demand is expected to remain subdued as larger producer Indonesia moves to boost its shipments.

Kulim (Malaysia) Berhad has received its first “post-pandemic batch” of migrant workers, the palm oil planter said, and more workers are expected to enter this month to help ease a severe labour crunch.

In top producer Indonesia, inventories in April were 6.1 million tonnes by the end of April, up 7.4% from the month before.

In related oils, Dalian’s most-active soyoil contract DBYcv1 fell 3.9%, while its palm oil contract DCPcv1 slipped 3.3%. Soyoil prices on the Chicago Board of Trade BOcv1 were down 1.4%.

A retreat in oil prices continued, as investors reassessed the risks of recession and how fuel demand will be affected by rising interest rates. O/R

“The overall scenario remains bearish for prices and any recovery will be short lived,” Paramalingam said.