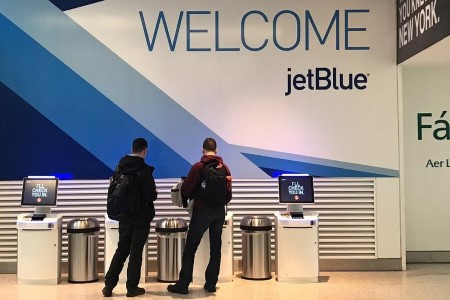 Despite cutbacks in other categories due to recession worries, consumers eager to travel after the pandemic continue to book flights and hotels. Hotels have been able to turn this demand into increased profitability far more effectively than airlines.

David Tarsh, spokesperson for travel data analytics company Forward Keys, said the problems faced by airlines and airports are harder to resolve than those in the lodging industry.

“In the case of labor in hospitality, your shortage is probably more with less-skilled workers than in the case of the aviation industry,” he said. “If you’re short of cabin crew and you’re short of security people in the airport, you can’t just increase wages and suddenly fill these roles. People also need to be trained.”

U.S. carriers are struggling to offset higher costs such as fuel even as booming travel demand has given them strong pricing power.

JetBlue Airways Corp JBLU.O on Tuesday reported a quarterly adjusted loss of 47 cents per share compared to analysts’ predictions of an 11-cent loss.

“Generally speaking, we’re in decent shape. We are not running around with our hair on fire, if you will, anymore,” said MGM Resorts CEO Bill Hornbuckle in Wednesday’s earnings call.

“We’re up into the double digits in terms of total revenue (growth) for Thanksgiving. And actually, for Christmas, we are seeing a solid pickup as well,” said Host CEO Jim Risoleo on a call for analysts on Thursday.

Virtual land in the Metaverse dominated NFT sales over past week

Lyft Continues to Gain on Uber in Crucial Areas