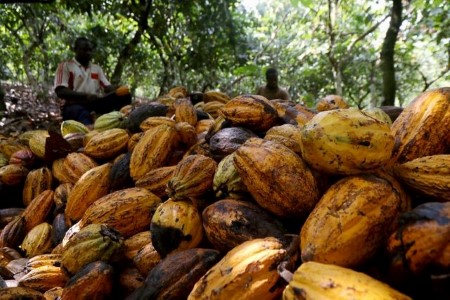 * North American cocoa grindings unexpectedly fell in the fourth quarter of 2021 to 116,613 tonnes, down 1.2% from the same period a year earlier, according to data from the National Confectioners Association.

* Dealers noted there continued to be an overall upward trend in grindings, despite the North American data, with the European and Asian fourth-quarter grinds both rising by 6.3% year on year.

* Fitch Solutions, in a report on Friday, said it expected a higher average price for cocoa of 1,775 pounds in 2022, with more international travel helping to boost demand for chocolate.

* Dealers said broad-based weakness in financial markets had prompted some investors to take profit after the March contract climbed to a three-week high of 19.29 cents on Thursday.

* “After a 5.35% jump on the week, the market coming to Friday has taken some profit. The question is, have we seen the high for the near term, or not?” said a U.S.-based broker.

* Dealers said recent weakness in robusta prices had led to a slowdown in farmer selling in top robusta producer Vietnam.