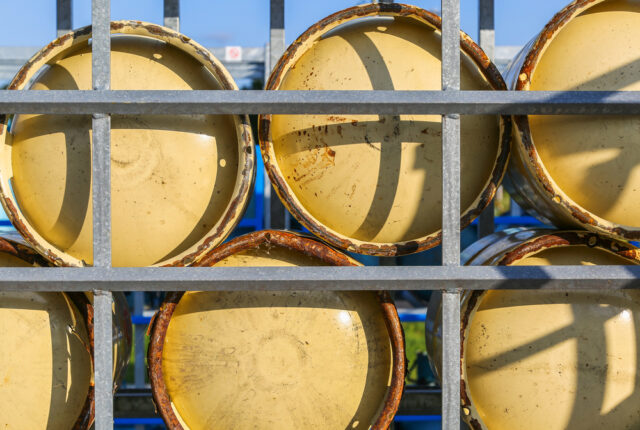 Energy stocks are set to open around breakeven levels, though broader equities have taken a steep leg lower following much higher than expected inflation data just released at 8:30 AM ET. Consumer prices in January surged 7.5%, well above expectations, and were the highest since 1982.  Equities turned lower, treasury yields spiked, with the 10-year rising to 1.986%, the US Dollar gained, and expectations for larger and quicker rate hikes from the Fed emerged.

Meanwhile, oil prices rose on Thursday after rallying on an unexpected drop in U.S. crude inventories in the previous session, as investors awaited the outcome of U.S.-Iran nuclear talks that could add crude supplies quickly to global markets. Robust demand recovery from the coronavirus pandemic has kept global oil supplies snug, with inventories at key fuel hubs globally hovering at multi-year lows.

U.S. crude inventories fell 4.8 million barrels in the week to February 4, dropping to 410.4 million barrels – their lowest for commercial inventories since October 2018, the EIA said. Analysts in a Reuters poll had forecast a 369,000-barrel rise. U.S. product supplied – the best proxy for demand – peaked at 21.9 million bpd over the past four weeks due to strong economic activity nationwide, EIA data showed. “We are seeing some consolidation after a fairly constructive EIA report,” said Warren Patterson, ING’s head of commodities research.

Natural gas futures are lower by a nickel, trading around $3.95, ahead of weekly inventory data calling for a 222 bcf drawdown.

The Board of Directors of TotalEnergies, meeting on February 9, 2022, under the Chairmanship of Chief Executive Officer Patrick Pouyanné, approved the Company’s 2021 financial statements. In 2021, the Company generated cash flow of $30.7 billion, up $13 billion compared to 2020, and adjusted EBITDA of $42.3 billion. The Company reported adjusted net income of $18.1 billion, representing a return on equity of 16.9% and a return on capital employed (ROACE) of nearly 14% for 2021, which demonstrates the quality of its portfolio and operations. IFRS net income was $16 billion (€13.6 billion). In line with the policy announced in February 2021, the Board of Directors will propose at the Shareholders’ Meeting to be held on May 25, 2022, the distribution of a final 2021 dividend of €0.66 per share, equal to the three 2021 interim dividends already declared. In addition, the Board of Directors defined a return-to-shareholder policy for 2022 that will combine, on the one hand, an increase in interim dividends of 5% given the structural growth in cash flow generated by the LNG and electricity business, and, on the other hand, buybacks to share the surplus cash flow from high hydrocarbon prices. These share buybacks are expected to be $2 billion for the first half of 2022. In accordance with the resolution approved by shareholders in May 2021 on TotalEnergies’ ambitions for sustainable development and energy transition toward carbon neutrality, the Board of Directors will report on the progress made in implementing these ambitions at the Shareholders’ Meeting on May 25, 2022.

TotalEnergies announced it has signed a definitive agreement with SunPower Corp.’s to purchase its Commercial & Industrial Solutions (CIS) business for $250 million, including $60 million of earn-out, subject to regulatory evolution.

The Board of Directors, under the conditions set forth at the Extraordinary Shareholders’ Meeting of May 26, 2017, decided to decrease the share capital of TotalEnergies by way of cancellation of 30,665,526 treasury shares representing 1.16% of the share capital. These shares were repurchased from November 8 to December 22, 2021.

TotalEnergies, through its affiliate TotalEnergies E&P USA, announced its decision not to sanction and so to withdraw from the North Platte deepwater project in the U.S. Gulf of Mexico. TotalEnergies who held a 60% operated interest in North Platte, alongside its joint-interest owner Equinor (40%) has duly notified its partner and the relevant authorities of its immediate withdrawal from the project, and of its resignation as operator which will be effective following a short transition period to ensure an orderly hand-over of operatorship.

Oslo Børs has resolved to admit the shares of Vår Energi ASA to trading on Oslo Børs.

Continental Resources announced that its Board of Directors has declared a quarterly dividend of $0.23 per share on the Company’s outstanding common stock, payable on March 4, 2022 to stockholders of record on February 22, 2022.

CNX Resources announced total proved reserves of 9.63 Tcfe, as of December 31, 2021. CNX organically added 907 Bcfe of proved reserves through extensions and discoveries, which resulted in the company replacing over 153% of its 2021 net production of 590 Bcfe.

Oasis Petroleum provided its return of capital plan, announced preliminary 2021 results, and issued its 2022 outlook.  Oasis’ return of capital plan remains true to the Company’s strategic goals, which include exercising capital discipline and delivering both return on, and of, capital to shareholders. Oasis is committed to returning $280MM of capital to shareholders over the next year ($70MM per quarter) through an increase to the aggregate base dividend from $40MM to $45MM per year, variable dividends, and incremental share repurchases. Oasis repurchased 680,235 shares during 4Q21 for $85.4MM, completing the prior $100MM repurchase program. With the lower share count, the board of directors of Oasis has increased the quarterly base dividend 17% to $0.585 per share for 4Q21 for shareholders of record as of February 21, 2022, payable on March 4, 2022. The Oasis board of directors has authorized a new $150MM share repurchase program, which replaces the $100MM historical program that was fully utilized in 2021. Oasis is providing select preliminary unaudited financial results and operational updates for 4Q21 which include: Generated significant free cash flow during 4Q21. As of 12/31/21, Oasis had approximately $172MM of cash, $400MM of long-term debt and no amounts drawn on its $900MM borrowing base ($450MM of elected commitments). Oasis is providing preliminary 2022 guidance. Oasis constructed its 2022 plan to focus on capital efficiency and cash flow generation. Oasis expects to generate over $500MM of free cash flow in 2022 at $70/bbl WTI and $3.50/MMBtu NYMEX gas, including the impact of derivatives but excluding dividends. The 2022 reinvestment rate is expected to be at or below 40% using the same pricing.

ChampionX announced fourth quarter of 2021 and full year 2021 results. For the fourth quarter of 2021, revenue was $822.1 million, net income attributable to ChampionX was $43.4 million, and adjusted EBITDA was $133.1 million. Income before income taxes margin was 6.1%, and adjusted EBITDA margin was 16.2%. Cash provided by operating activities was $88.4 million, and free cash flow was $71.0 million.

Weatherford International plc announced a segment recast by quarter for the full year 2020 and through the third quarter of 2021. Effective the fourth quarter of 2021, Weatherford realigned its reporting structure to three product line segments (1) Drilling and Evaluation (2) Well Construction and Completions, and (3) Production and Intervention. The updated structure further refines the Company’s organizational focus and business strategy around the well life cycle and is intended to drive improved customer collaboration and growth opportunities. All segments provide services to core oil and gas as well as new energy markets.

The board of directors of Phillips 66 has declared a quarterly dividend of 92 cents per share on Phillips 66 common stock. The dividend is payable on March 1, 2022, to shareholders of record as of the close of business on Feb. 22, 2022.

PBF Logistics LP announced fourth quarter 2021 net income attributable to the limited partners of $42.3 million, or $0.67 per common unit. During the fourth quarter, the Partnership generated cash from operations of $44.1 million, EBITDA attributable to PBFX of $62.7 million, Adjusted EBITDA of $60.8 million and distributable cash flow of $52.3 million. Included in reported results for the fourth quarter is a net gain of $1.9 million, or $0.03 per common unit, consisting of a gain on sale of assets, partially offset by non-cash unit-based compensation and environmental remediation costs associated with the East Coast Terminals.

Plains All American Pipeline, L.P. and Plains GP Holdings reported fourth-quarter and full-year 2021 results and provided the following updates: Reported fourth-quarter and full-year 2021 Net income attributable to PAA of $450 million and $593 million, respectively, and 2021 Net cash provided by operating activities of $635 million and $1,996 million, respectively; Reported fourth-quarter and full-year 2021 Adjusted EBITDA attributable to PAA of $564 million and $2,196 million, respectively. As a result of meaningful progress reducing debt and an improved business outlook, the company plans to continue increasing cash returned to equity holders through a combination of distribution growth and discretionary common equity repurchases under the $500 million repurchase authorization. Plains has repurchased approximately $228 million of common equity, or 24.3 million common units at an average price of $9.40 since the program was established in November 2020. For its first quarter 2022 distribution payable in May 2022, management intends to recommend to the Board of Directors of PAA GP Holdings LLC an increase to PAA’s and PAGP’s annualized distribution from $0.72 to $0.87 per common unit and Class A share. Consistent with past practice, the Plains Board will consider management’s recommendation prior to its approval and declaration of the distribution for the first quarter of 2022.

Nasdaq Advisory Services Energy Team is part of Nasdaq’s Advisory Services – the most experienced team in the industry. The team delivers unmatched shareholder analysis, a comprehensive view of trading and investor activity, and insights into how best to manage investor relations outreach efforts. For questions, please contact Tamar Essner.

This communication and the content found by following any link herein are being provided to you by Corporate Solutions, a business of Nasdaq, Inc. and certain of its subsidiaries (collectively, “Nasdaq”), for informational purposes only. Nasdaq makes no representation or warranty with respect to this communication or such content and expressly disclaims any implied warranty under law. Sources include Reuters, TR IBES, WSJ, The Financial Times and proprietary Nasdaq research.

Walmart erases 2021 gain after earnings. Trader says buy this basket of stocks instead

AI Being Used To Bust Those Netflix Account Moochers