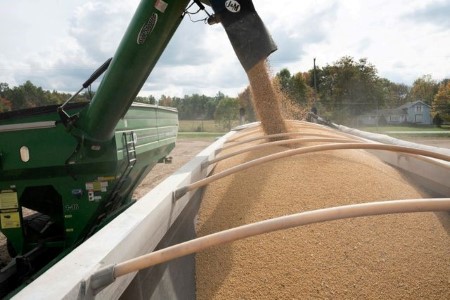 CHICAGO, Oct 13 (Reuters) – U.S. soybean crushings likely fell to a three-month low in September, according to analysts polled ahead of a monthly National Oilseed Processors Association (NOPA) report due on Friday.

NOPA members, which handle about 95% of all soybeans processed in the United States, were estimated to have crushed 155.072 million bushels of soybeans in September, according to the average of estimates from 10 analysts.

If realized, the figure would be down 2.4% from the 158.843 million bushels processed in August and down 4% from September 2020, when crushers processed 161.491 million bushels. It would also be the smallest crush since June.

The monthly NOPA report is scheduled for release at 11 a.m. CDT (1600 GMT) on Friday. NOPA releases crush data on the 15th of each month, or the next business day.

Soyoil supplies at the end of September were projected at 1.663 billion pounds, based on estimates from seven analysts. If realized, the figure would be down 0.3% from 1.668 billion the prior month.

It’s not even Halloween, but retailers are already duking it out to win your...

Investors Are Focused on Treasurys. Here’s What the Fed Could Do.