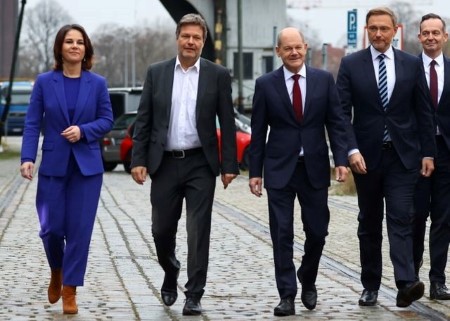 The coalition agreement will install a three-way federal government and end 16 years of conservative-led rule under Angela Merkel following a September election. The new coalition comprises the centre-left Social Democrats, the ecologist Greens and the libertarian Free Democrats (FDP).

The controversial weed-killer Glyphosate will be removed from the market by the end of 2023 as part of a wider programme to reduce weed-killer use, the agreement said.

Glyphosate has faced allegations it can cause cancer and has faced lawsuits in the United States and restrictions in countries including France, though regulators worldwide have determined it to be safe.

The new government wants to achieve a 30% level of organic farming in Germany by 2030. More financial support will be provided to farmers to switch from conventional to organic farming, it said.

Transport of live farm animals to third countries outside the EU will only be permitted when the routes have proven facilities allowing for care and welfare of animals.

The legal basis will be introduced to permit video surveillance of sections of slaughterhouses of special importance to animal welfare.

The new government wants to “significantly reduce” emissions including ammonia and methane from agriculture and move German farming towards the goal of climate neutrality.

It aims to decide a national food strategy by 2023, with a focus on healthier food for children. Moves will be made to find more alternatives to meat.

Advertising of foods with high sugar, fat and salt content targeting children under 14 will be stopped, though the coalition agreement made no mention of sugar taxes.

Movie theater owners are optimistic ticket sales can continue to recover as the key...

What Lies Beneath: Vets worry polluted base made them ill