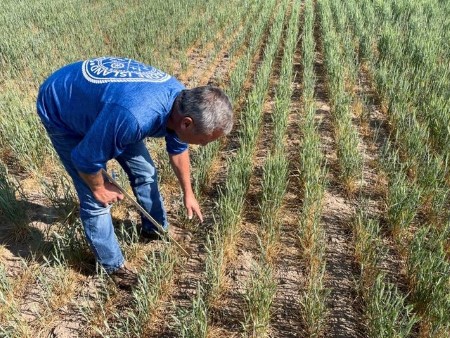 CHICAGO, June 27 (Reuters) – U.S. wheat futures fell to their lowest price since February on Monday, pressured by the expanding harvest of winter wheat in the northern hemisphere and a lack of demand for U.S. supplies, traders said.

“Wheat has no friends right now. We are at harvest time and that is weighing on the market… And the demand is just really bad, especially for the export side,” said Jack Scoville, analyst with the Price Futures Group in Chicago.

Analysts surveyed by Reuters on average expect the U.S. Department of Agriculture’s weekly crop progress report, due later on Monday, to show the winter wheat harvest as 40% complete, up from 25% a week ago.

Corn futures declined on better-than-expected weekend rains in portions of the Midwest that should bolster crop prospects, as well as trade expectations for the USDA to raise its estimate of U.S. corn plantings in a June 30 acreage report.

Still, analysts surveyed by Reuters on average expected the USDA later on Monday to lower its weekly condition ratings for corn while leaving soybean ratings unchanged.

July soybeans SN2 were up 21-1/4 cents at $16.32 a bushel, buoyed by firm cash markets amid dwindling supplies of old-crop soybeans. Support also stemmed from strength in soymeal SMN2 and soyoil BON2 futures as well as crude oil CLc1, which sometimes leads the soy complex due to soyoil’s role as a feedstock for biodiesel fuel.

Analysts expect the USDA on Thursday to show a decrease in U.S. plantings of both soybeans and spring wheat compared to its March forecasts. [nL1N2YB1QJ]

Museums in the metaverse: How Web3 technology can help historical sites