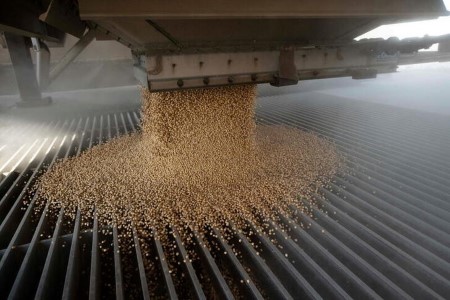 CHICAGO, Aug 5 (Reuters) – U.S. soybean futures fell on Friday for the fourth session of the last five, pressured by forecasts for spotty Midwest rains that could boost the health of it crop as it passes through key development periods, traders said.

“Last year taught us that crops can survive (and even thrive) on minimal, just-in-time rains,” Matt Zeller, director of market information at brokerage StoneX said in a note to clients.

Corn futures firmed on technical buying while wheat slipped as traders monitored the progress of exports from Black Sea ports in war-torn Ukraine.

Chicago Board of Trade November soybean futures SX2 settled down 9 cents at $14.08-3/4 a bushel.

Private analytics firm IHS Markit Agribusiness forecast 2022 soybean production of 4.530 billion bushels, with an average yield of 51.8 bushels per acre. Both the yield and production forecasts were bigger than the U.S. Agriculture Department’s July estimates.

Three ships carrying a total of 58,041 tonnes of corn have been authorised to leave Ukrainian ports on Friday as part of a deal to unblock grain exports.

Wheat hit a six-month low earlier this week as the resumption of Ukrainian maritime trade weighed on prices.

Ukraine could start exporting wheat from this year’s harvest from its sea ports in September under a landmark deal brokered by Turkey and the United Nations, Ukraine’s first deputy minister of agriculture said.

(Additional reporting by Gus Trompiz in Paris and Naveen Thukral in Singapore; Editing by Marguerita Choy)

It’s Tax Time Again. Do We Really Know What That Means for Crypto?

Dollar Up, U.S. Inflation Likely to Have Minimal Impact on Fed Policy By Investing.com