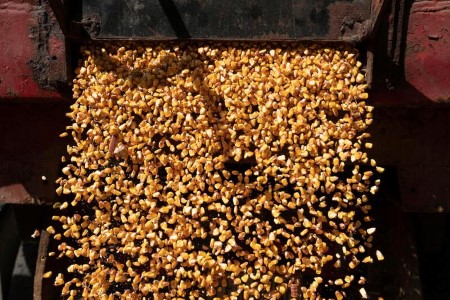 CHICAGO, Jan 21 (Reuters) – Chicago Board of Trade corn futures rose to their highest in seven months on Friday as concerns about production in South America spurred demand for U.S. supplies, traders said.

Soybean futures eased from the seven-month top they hit on Thursday, succumbing to a round of profit taking. Soybeans closed well above lows reached overnight after government reports showed export demand remained strong.

“We are seeing a lot of sloshing of money around in the markets,” said Greg Grow, director of agribusiness at Archer Financial Services in Chicago. “It is a real volatile, choppy affair. We came in this morning and we got some export business.”

The U.S. Agriculture Department (USDA) said private exporters reported the sale of 132,000 tonnes of soybeans to China and 247,800 tonnes of corn to unknown destinations.

Reduced harvest prospects in Brazil and Argentina due to dryness could push more Chinese demand towards the United States, traders said.

CBOT March soft red winter wheat WH2 was down 11-1/4 cents at $7.80 a bushel after hitting a three-week high on Thursday.

Traders monitored talks between Washington and Moscow to gauge tensions over Ukraine, which like Russia is a major grain exporter via the Black Sea. Fears of Russian military action in Ukraine were tempered by talks in Geneva at which top diplomats agreed to pursue dialogue.

(Additional reporting by Gus Trompiz in Paris and Naveen Thukral in Singapore; Editing by David Evans and Susan Fenton)

Why the Marijuana Industry Needs Crypto