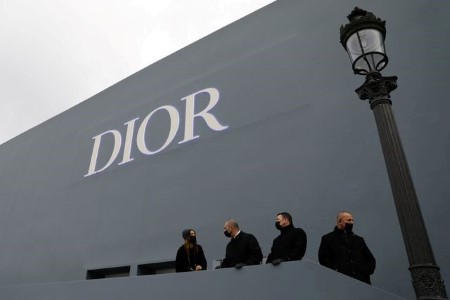 PARIS, Jan 21 (Reuters) – Dior Homme took to the catwalk with a lineup of embellished men’s looks, offering a romantic take on tailoring for one of the major shows of Paris fashion week.

Fashion industry events have remained subdued due to the recent surge in coronavirus cases, which kept many international visitors from attending, but the Dior show drew crowds of onlookers to the Place de la Concorde angling for a view of the celebrity arrivals, who included Naomi Campbell.

Inside the temporary venue, models strode down a replica of the ornate Pont Alexandre bridge in grey Birkenstocks and sequined derbies, showcasing the designs drawn up by Dior men’s artistic director Kim Jones.

“I wanted to look at the archive, at the purity of the beginnings of the house, at its original impulse,” said Jones, who dedicated the show to fashion journalist Andre Leon Tally, who died on Tuesday.

Drawing on silhouettes from early collections of the 75-year-old label, which belongs to LVMH, the designer tweaked the house’s famously feminine bar jacket offering a version for men.

He brightened the lineup’s muted palette of grey, beige and ivory tones with embroidered lily-of-the-valley flower patterns and shimmery patches of sequins, applying them to sweaters and sleek puffer jackets.

Finishing the looks, models wore trim berets that matched their outfits. The house’s hat designer, Stephen Jones, accompanied the designer for his post-show bow, when a burst of sunlight was projected onto the backdrop of a grey, Paris skyline.

Biggest Bitcoin fund in the world could become ETF by July as GBTC nears...