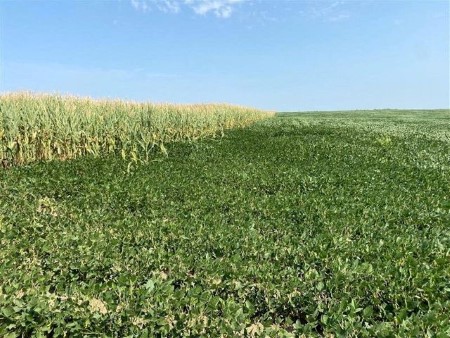 NAPERVILLE, Ill., June 27 (Reuters) – Much-needed rain showers and storms moved across a large swath of the U.S. Corn Belt this weekend, lifting crop health in some key production states like Iowa and Illinois.

But many areas either missed the rain or did not get enough, leaving crops thirsty following this month’s persistent hot and dry weather. That caused five of the 11 Crop Watch producers to trim their corn conditions this week.

Each producer is reporting condition scores weekly for their subject corn and soybean field using a 1 to 5 scale, where 3 is average, 1 is very poor and 5 excellent. These ratings are more visual in nature and not linked to yield, as separate scores for that will be available soon.

The 11-field average corn condition score fell to 4.11 from 4.25 last week on reductions in southeast Illinois, Indiana, Ohio, Nebraska and North Dakota. An increase back to 5 in eastern Iowa after 3.5 inches (89 mm) of rain offset some of the other declines.

That same rain total was observed in western Illinois, where the soybeans improved to a 4 from 3.5 last week. That increased the 11-field average soybean condition to 3.66 from 3.61 after an offsetting bump in South Dakota and cut in Ohio.

The combined corn score is very similar to the Crop Watch average from a year ago, but the soybeans are in worse shape than a year ago, when beans were planted earlier and emergence issues were not prominent.

Cooler weather in the next few days should help most dry crops hang on until the next rain chances, which are this weekend. Corn has been rolling its leaves in the dry weather, particularly in Nebraska, southeastern Illinois and Indiana, where recent moisture was disappointing.

No rain fell last week for the Crop Watch locations in South Dakota, Nebraska and Ohio, and a quarter inch fell in Indiana and western Iowa. Around a half inch or slightly more was observed in southeast Illinois, Minnesota and Kansas, and North Dakota picked up over an inch.

A dry forecast this week for North Dakota will be desirable, but most other producers eye rain, and to varying degrees. The first corn fields will be pollinating early next month, and many of the Crop Watch soybeans have already started setting blooms, increasing the importance of forecasts in coming weeks.

The weak spots for Crop Watch include the corn in Ohio, rated 2.75 for condition since several inches of rain fell following planting. The plants are thin and roots shallow, heightening the need for frequent rain to fight soil compaction. The producer reports this is prominent in the area.

Corn in North Dakota is still trying to recover from a recent hailstorm and frequent wind damage, scoring just a 1.5. Soybeans are in worse shape, rated 1. The producer replanted part of the bean field on Friday in a gamble that it may add a few bushels to yield in the end.

Improvement to North Dakota soy health is possible in the coming weeks pending further emergence, and heavy storms and rain must be avoided.

Photos of the Crop Watch fields can be tracked on my Twitter feed using handle @kannbwx.

Karen Braun is a market analyst for Reuters. Views expressed above are her own.

Back to back all-time highs from AVAX, ENJ and EGLD suggest it’s ‘altseason’