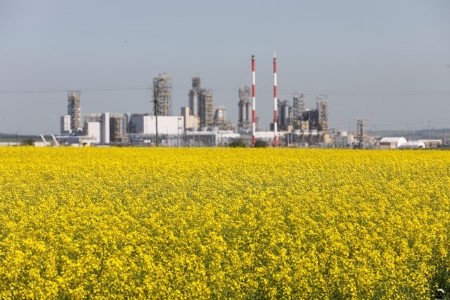 WINNIPEG, Manitoba, Jan 21 (Reuters) – Soaring demand for Canadian canola oil used in food and fuel has resulted in plans for a massive increase in capacity to process canola seeds, including this week’s announcementof a C$360 million ($289 million) crush plant project.

But while buyers are lining up, some analysts wonder if there is enough of the crop to go around and doubt all the projects will proceed.

Combined, the plans would increase Canada’s canola crush capacity by 6.8 million tonnes, or 62%.

That is a tall order to fill for Canadian farmers, whose canola production peaked in 2017, said Marlene Boersch, managing partner of Mercantile Consulting Venture. She is skeptical that all of the crush plants will materialize.

“We do have a (crop) production problem. I don’t think we’ll see these substantial investments for years to come.”

Output concerns go beyond last year’s drought. Canola acreage also hit a peak in 2017 and yields were flat from 2017-2020 before the drought.

Patrick Bergermann, FCL’s associate vice-president of energy roadmap, expects its plant to purchase some canola that would otherwise go for export, which usually accounts for about half the annual crop.

FCL’s plant, which may open in 2025, pending Ottawa finalizing its clean fuel regulation, will add value both from generating oil for fuel and from meal for use as a potential food protein source, he said.

“There’s still ample opportunity for the industry to add crush capacity,” he said.

For crushers to attract more canola seed away from export channels, they would have to bid aggressively for it, which would reduce margins, said Ken Ball, a commodity futures advisor with PI Financial. He expects project delays or cancellations.

Saskatchewan farmer Bernie McClean says the new crush plants will reduce farmers’ vulnerability to trade restrictions on Canadian exports, such as from China. Farmers may boost plantings if they can successfully grow canola in hotter, drier areas, he said.

McClean, who sows 40-50% of his fields with canola, does not intend to plant more in the future, however. Sowing canola too often on the same fields can spread crop disease.

“If we get too carried away, Mother Nature has a way of coming around to bite us in the butt,” McClean said.

The Canola Council of Canada industry group sees production rising to 26 million tonnes by 2025, a 33% increase from pre-drought output, based on higher yields per acre.

Demand, however, continues to rise, enticing the crushers.

A proposed rule is expected early this year from the U.S. Environmental Protection Agency approving canola for use in making renewable diesel or greener jet fuel, Everson said.

North American biofuels could consume some 6.5 million tonnes of canola annually by 2030, nearly four times the current volume, he said.

(Reporting by Rod Nickel in Winnipeg Editing by Marguerita Choy)

Blockchain.com’s value rockets to $14B after new funding round: Reports