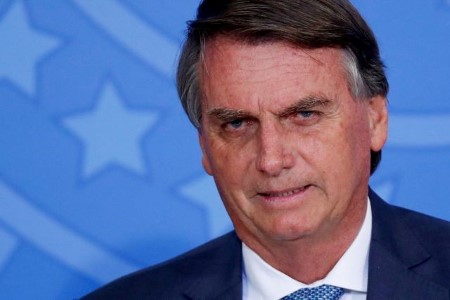 SAO PAULO, May 24 (Reuters) – Brazilian President Jair Bolsonaro signed a decree on Tuesday to step up fines for environmental crimes, according to the official government gazette, in a move to allow more aggressive protection of the Amazon rainforest.

Reuters exclusively reported earlier in the day that Bolsonaro was expected to sign the executive order as soon as Tuesday.

The decree raises the potential value of fines for falsifying documents to cover up illegal logging, clarifies heavier consequences for repeat environmental offenders and will help to reduce the backlog of fines pending collection.

Environmental fines – which also target infractions such as unauthorized hunting, fishing and pollution – are one of Brazil’s key tools for combating illegal deforestation.

The decree, which goes into effect immediately, is one of the first concrete steps the Bolsonaro government has made to bolster Amazon protections following its commitment to end illegal deforestation by 2028 at the COP26 U.N. climate summit in November.

Preserving the Amazon, the world’s largest rainforest, is vital to preventing catastrophic climate change because of the vast amounts of climate-warming carbon it stores.

The decree also marks a reversal for Bolsonaro, an ardent critic of environmental fines. In his 2018 campaign, the right-wing former army captain railed against an “industry of fines” created by environmental agencies to persecute farmers. He has continued to criticize fines in the run-up to this October’s presidential election.

Bolsonaro’s office and the Environment Ministry did not respond to requests for comment.

Under the decree, falsifying documents to introduce illegal timber into legal supply chains will bear an additional penalty of 300 reais ($58.62) per cubic meter, with a maximum fine of 50 million reais. The previous cap for defrauding the lumber tracking system was 1 million reais.

The decree also undoes some of the red tape created by Bolsonaro himself. Shortly after assuming office in 2019, the president signed an order that gave individuals and companies accused of environmental crimes the right to “reconciliation hearings” that can reduce or cancel penalties.

Those hearings came in addition to an existing system to adjudicate fines that already allowed for multiple appeals.

A Reuters investigation last year showed that the added bureaucratic step, without adequate government staff to hold the hearings, meant 17,000 fines had piled up and gone uncollected as they awaited audiences.

“Fines are very important for stopping deforestation, to scare off illegal deforesters … principally in the Amazon,” said Jose Sarney Filho, former environment minister from 2016 to 2018. “This new step discredited fines as a tool.”

As fines have gone uncollected, deforestation of Brazil’s Amazon rainforest continued to accelerate.

Deforestation surged to a 15-year high in 2021, according to government satellite data. Preliminary figures show destruction set a fresh record for the period of January to April this year.

The new decree requires those facing fines to ask for a “reconciliation” appeals hearing rather than being automatically granted one, a move that could reduce the backlog.

The decree adds to Bolsonaro’s efforts since last year to show that his government is taking environmental protection more seriously, following pressure from European and American leaders to protect the Amazon rainforest.

Bolsonaro brought forward the country’s emissions neutrality target during a White House Earth Day summit in April 2021. He told the U.N. General Assembly in September that Brazil was doubling its environmental enforcement budget.

At the November U.N. climate summit in Glasgow, Brazil committed to stop illegal deforestation by 2028.

But up until now, few policy changes have reflected a plan to keep those promises, as evidence of deforestation continues to rise, according to Ana Karine Pereira, an environmental policy professor at University of Brasilia.

The 2021 enforcement budget went mostly unspent, restaffing of key conservation agencies has been slow and Bolsonaro still calls for more mining and commercial farming in the Amazon.

When speaking to his political base among farmers, Bolsonaro also continues to criticize environmental fines.

In January this year, Bolsonaro told an agricultural event that a reduction in environmental fines was a mark of his government’s success.

“We ended major environmental problems, especially with regard to fines. Do they have to exist? Yes. But we discussed it and reduced fines in the field by more than 80%,” Bolsonaro said.

Environmental enforcement agency Ibama did not reply to questions about official data to back up Bolsonaro’s estimate.

Tourists are flocking back to Southeast Asia — but the robust recovery is showing...