Home Business What Is Going On With China, Cotton and All of These Clothing... 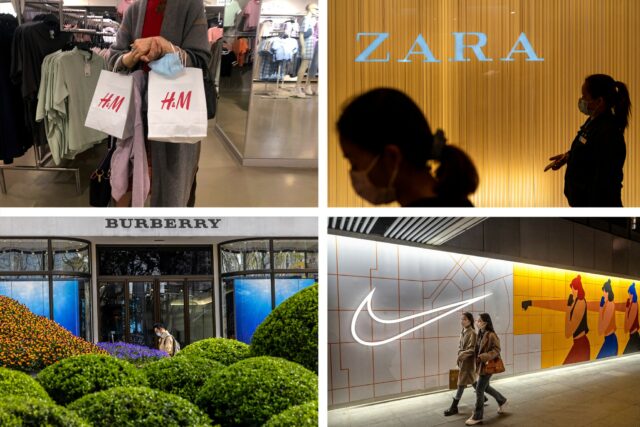 Last week, calls for the cancellation of H&M and other Western brands went out across Chinese social media as human rights campaigns collided with cotton sourcing and political gamesmanship. Here’s what you need to know about what’s going on and how it may affect everything from your T-shirts to your trench coats.

What’s all this I’m hearing about fashion brands and China? Did someone make another dumb racist ad?

No, it’s much more complicated than an offensive and obvious cultural faux pas. The issue centers on the Xinjiang region of China and allegations of forced labor in the cotton industry — allegations denied by the Chinese government. Last summer, many Western brands issued statements expressing concerns about human rights in their supply chain. Some even cut ties with the region all together.

Now, months later, the chickens are coming home to roost: Chinese netizens are reacting with fury, charging the allegations are an offense to the state. Leading Chinese e-commerce platforms have kicked major international labels off their sites, and a slew of celebrities have denounced their former foreign employers.

Why is this such a big deal?

The issue has growing political and economic implications. On the one hand, as the pandemic continues to roil global retail, consumers have become more attuned to who makes their clothes and how they are treated, putting pressure on brands to put their values where their products are. One the other, China has become an evermore important sales hub to the fashion industry, given its scale and the fact that there is less disruption there than in other key markets, like Europe. Then, too, international politicians are getting in on the act, imposing bans and sanctions. Fashion has become a diplomatic football.

This is a perfect case study of what happens when market imperatives come up against global morality.

Tell me more about Xinjiang and why it is so important.

Xinjiang is a region in northwest China that happens to produce about a fifth of the world’s cotton. It is home to many ethnic groups, especially the Uyghurs, a Muslim minority. Though it is officially the largest of China’s five autonomous regions, which in theory means it has more legislative self-control, the central government has been increasingly involved in the area, saying it must exert its authority because of local conflicts with the Han Chinese (the ethnic majority) who have been moving into the region. This has resulted in draconian restrictions, surveillance, criminal prosecutions and forced-labor camps.

OK, and what about the Uyghurs?

A predominantly Muslim Turkic group, the Uyghur population within Xinjiang numbers just over 12 million, according to official figures released by Chinese authorities. As many as one million Uyghurs and other Muslim minorities have been retrained to become model workers, obedient to the Chinese Communist Party via coercive labor programs.

So this has been going on for awhile?

At least since 2016. But after The New York Times, The Wall Street Journal, Axios and others published reports that connected Uyghurs in forced detention to the supply chains of many of the world’s best-known fashion retailers, including Adidas, Lacoste, H&M, Ralph Lauren and the PVH Corporation, which owns Calvin Klein and Tommy Hilfiger, many of those brands reassessed their relationships with Xinjiang-based cotton suppliers.

In January, the Trump administration banned all imports of cotton from the region, as well as products made from the material and declared what was happening “genocide.” At the time, the Workers Rights Consortium estimated that material from Xinjiang was involved in more than 1.5 billion garments imported annually by American brands and retailers.

That’s a lot! How do I know if I am wearing a garment made from Xinjiang cotton?

You don’t. The supply chain is so convoluted and subcontracting so common that often it’s hard for brands themselves to know exactly where and how every component of their garments is made.

So if this has been an issue for over a year, why is everyone in China freaking out now?

It isn’t immediately clear. One theory is that it is because of the ramp-up in political brinkmanship between China and the West. On March 22, Britain, Canada, the European Union and the United States announced sanctions on Chinese officials in an escalating row over the treatment of Uyghurs in Xinjiang.

Not long after, screenshots from a statement posted in September 2020 by H&M citing “deep concerns” about reports of forced labor in Xinjiang, and confirming that the retailer had stopped buying cotton from growers in the region, began circulating on Chinese social media. The fallout was fast and furious. There were calls for a boycott, and H&M products were soon missing from China’s most popular e-commerce platforms, Alibaba Group’s Tmall and JD.com. The furor was stoked by comments on the microblogging site Sina Weibo from groups like the Communist Youth League, an influential Communist Party organization.

Within hours, other big Western brands like Nike and Burberry began trending for the same reason.

And it’s not just consumers who are up in arms: Influencers and celebrities have also been severing ties with the brands. Even video games are bouncing virtual “looks” created by Burberry from their platforms.

Backtrack: What do influencers have to do with all this?

Influencers in China wield even more power over consumer behavior than they do in the West, meaning they play a crucial role in legitimizing brands and driving sales. When Tao Liang, otherwise known as Mr. Bags, did a collaboration with Givenchy, for example, the bags sold out in 12 minutes; a necklace-bracelet set he made with Qeelin reportedly sold out in one second (there were 100 made). That’s why H&M worked with Victoria Song, Nike with Wang Yibo and Burberry with Zhou Dongyu.

But Chinese influencers and celebrities are also sensitive to pleasing the central government and publicly affirming their national values, often performatively choosing their country over contracts.

In 2019, for example, Yang Mi, the Chinese actress and a Versace ambassador, publicly repudiated the brand when it made the mistake of creating a T-shirt that listed Hong Kong and Macau as independent countries, seeming to dismiss the “One China” policy and the central government’s sovereignty. Not long afterward, Coach was targeted after making a similar mistake, creating a tee that named Hong Kong and Taiwan separately; Liu Wen, the Chinese supermodel, immediately distanced herself from the brand.

And what’s with the video games?

Tencent removed two Burberry-designed “skins” — outfits worn by video game characters that the brand had introduced with great fanfare — from its popular title Honor of Kings as a response to news that the brand had stopped buying cotton produced in the Xinjiang region. The looks had been available for less than a week.

So this is hitting both fast fashion and the high end. How much of the fashion world is involved?

Potentially, most of it. So far Adidas, Nike, Converse and Burberry have all been swept up in the crisis. Even before the ban, additional companies like Patagonia, PVH, Marks & Spencer and the Gap had announced that they did not source material from Xinjiang and had officially taken a stance against human rights abuses.

This week, however, several brands, including VF Corp., Inditex (which owns Zara) and PVH all quietly removed their policies against forced labor from their websites.

That seems squirrelly. Is this likely to escalate?

Brands seem to be concerned that the answer is yes, since, apparently fearful of offending the Chinese government, some companies have proactively announced that they will continue buying cotton from Xinjiang. Hugo Boss, the German company whose suiting is a de facto uniform for the financial world, posted a statement on Weibo saying, “We will continue to purchase and support Xinjiang cotton” (even though last fall the company had announced it was no longer sourcing from the region). Muji, the Japanese brand, is also proudly touting its use of Xinjiang cotton on its Chinese websites, as is Uniqlo.

Wait … I get playing possum, but why would a company publicly pledge its allegiance to Xinjiang cotton?

It’s about the Benjamins, buddy. According to a report from Bain & Company released last December, China is expected to be the world’s largest luxury market by 2025. Last year it was the only part of the world to report year on year growth, with the luxury market reaching 44 billion euros ($52.2 billion).

Is anyone going to come out of this well?

One set of winners could be the Chinese fashion industry, which has long played second fiddle to Western brands, to the frustration of many businesses there. Shares in Chinese apparel groups and textile companies with ties to Xinjiang rallied this week as the backlash gained pace. And more than 20 Chinese brands publicly made statements touting their support for Chinese cotton.

Howard Baketon - January 22, 2022 0
The first computer games were developed in the late 20th century with the sole purpose of entertaining their audience. One of the first goals...

Citi asks vaccinated staff in New York to report to office from Feb. 7...

Two years since Covid was first confirmed in U.S., the pandemic is worse than...

Who Writes the Story of the Metaverse?

Canon (CAJ) Gains As Market Dips: What You Should Know