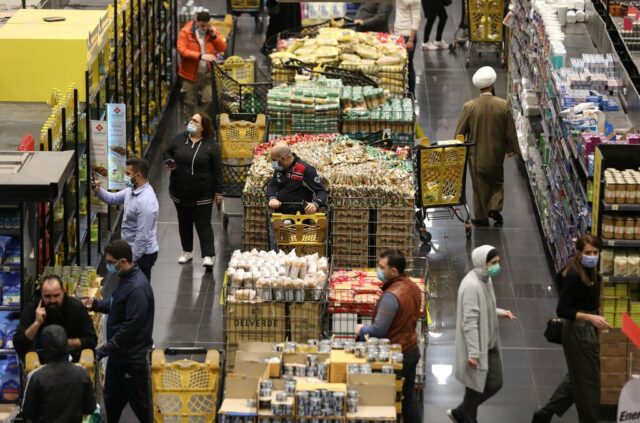 In normal times, Ziad Hassan, a grocery store manager in Beirut, would get a daily email from his chain’s management telling him which prices needed to be adjusted and by how much.

But as Lebanon’s currency has collapsed, sending the economy into a tailspin, the emails have come as often as three times a day, ordering price increases across the store.

“We have to change everything,” an exasperated Mr. Hassan said, adding that his employees often weren’t even able to finish marking one price increase before the next one arrived. “It’s crazy.”

The country’s economic distress grew more acute last week as the Lebanese pound sank to 15,000 to the dollar on the black market — its lowest level ever — sucking value from people’s salaries as prices for once affordable goods soared out of reach. It has since rebounded to about 12,000.

Lebanon has been grappling with a web of economic and political crises since late 2019 that have led to rampant unemployment, skyrocketing prices, road closures by angry protesters and a government with no clear plan to slow the descent. A catastrophic explosion in Beirut’s port in August, which killed 190 people and left a large swath of the capital in ruins, only deepened the misery.

In a country where most products are imported, the currency collapse has left no sector unaffected.

Food prices had risen 400 percent as of December compared with a year earlier, according to government statistics, while prices for clothing and shoes had gone up 560 percent and hotels and restaurants more than 600 percent.

Scores of pharmacies across the country went on strike last Friday to protest conditions that have left them without some medicines and cut into their profits. Professionals including lawyers, teachers, doctors and university professors have watched the value of their salaries shrink. Many others have been pushed into poverty.

In August, the United Nations said that more than 55 percent of Lebanon’s population had become poor, nearly double the number from the year before. Extreme poverty had increased threefold to 23 percent. And the situation has worsened since.

The crisis springs from the collapse of a policy by Lebanon’s central bank to keep the Lebanese pound, or lira, pegged to the dollar at a rate of about 1,500 to 1 since 1997. That allowed people to use the two currencies interchangeably and made it easy for merchants selling products in pounds to convert their profits into dollars to pay for imports.

But the state’s ability to maintain the peg faltered in late 2019, when mass protests erupted over decades of political corruption and poor governance. Since then, two governments have resigned and the gap between the pound and the dollar has widened. Western and United Nations officials’ calls for reforms, which could unlock foreign aid and a potential bailout from the International Monetary Fund, have gone unheeded.

For many Lebanese, the most personal element of the crisis is the grocery store, where products once considered staples have vanished and other essentials have tripled or quadrupled in price. There has been a run on staples like oil, flour, sugar and rice.

“Everything is soaring,” said Suheir al-Jizini, 60, after realizing that the price of the jug of cooking oil she had bought last week was now two-thirds higher. “I’m really shocked.”

She had come to the store planning to also buy laundry detergent and pasta, but realized she didn’t have enough cash. She said her husband brought in 750,000 pounds per month as a driver. That used to be worth $500 but was now less than $60.

The World Food Program said in November that food prices in Lebanon had increased 423 percent since October 2019, the largest jump since monitoring began in 2007. Prices have continued to rise since, putting acute pressure on the poor.

Faten Haidar, 29, said she was struggling to pull together meals for her three children as food prices shot up and her husband’s earnings from his coffee stand declined. Speaking by telephone from the northern city of Tripoli, she said that she had only labneh — a strained yogurt — in the fridge and that she was already in debt to her local shop.

Other essentials also depleted her funds, she said, like sanitary pads, whose price had quadrupled. That burden will increase when her 12-year-old daughter reaches puberty.

The value of soldiers’ and police officers’ salaries has also fallen, heightening concerns that social unrest and crime will increase. This month, Mohammed Fahmy, the interior minister, who oversees the security forces, said those salaries had “reached rock bottom.”

The cabinet of the departing prime minister, Hassan Diab, resigned after the disastrous explosion in the Beirut port on Aug. 4 and has yet to be replaced. That has left the government operating in a reduced, caretaker capacity for longer than it was in power.

A former prime minister, Saad Hariri, was designated in October to form a new government. But he has made little progress, despite 17 meetings to discuss political horse trading with President Michel Aoun. Last Thursday, they agreed to meet again on Monday.

Jihad Sabat, 48, has watched the decline from the window of the Beirut butcher shop he has run since 1997. Over the last year, he said, the price of meat has kept rising while the number of customers has dwindled.

“Meat has become a luxury,” he said.

He accused the country’s politicians of stealing the state’s money through corrupt schemes and criticized them for failing to stabilize the economy.

A friend hanging out in the shop interjected, “The problem is the people.” Mr. Sabat nodded.

“That’s an essential point,” he said. “If there were elections tomorrow, the same people would be back.”

In the grocery store, Mr. Hassan, the manager, said his branch sold less meat every month and more lentils, even though they, too, are imported and cost five times more than before the crisis.

Fights have broken out in the aisles over staples like rice, sugar and cooking oil subsidized by the government, he said. And it is common for customers to get sticker shock in the checkout lane when they realize they can afford only a few essentials.

“I don’t know how people keep going,” he said. “But it will eventually cause an explosion.”

Johnathan Brickson - June 27, 2022 0
If you haven’t got the message by now, Meta really wants you to use Reels, and provide it with more Reels content to feed...
Facebook

Gary Lee - June 27, 2022 0
A heckler who clapped former New York City Mayor Rudy Giuliani on the back at a campaign event was arrested, jailed for more...

Johnathan Brickson - June 27, 2022 0
If you haven’t got the message by now, Meta really wants you to use Reels, and provide it with more Reels content to feed...

Johnathan Brickson - June 27, 2022 0
If you haven’t got the message by now, Meta really wants you to use Reels, and provide it with more Reels content to feed...

Analysis-When it comes to oil, the global economy is still hooked By Reuters

How to Use LinkedIn to Highlight Your Brand Culture, and Attract the Right Candidates...