Home Business How a 32-year-old stylist with a billboard in Times Square became an... 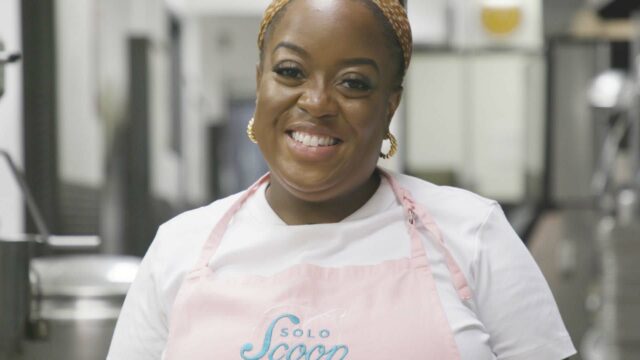 After 10 years of hustling and grinding, things were finally going well for 32-year-old wardrobe stylist Dennine Dyer. A recent project with the TLC show “Say Yes to the Dress America” ended up advertised on a big billboard in Times Square, and she was finishing up yet another project with a client. Her Trinidadian parents were initially against her choosing a risky career, so it felt extra special to get her big break.

It was Dyer’s “Mama, I made it” moment — but her joy was short lived.

The night in question was March 12, 2020. Just hours later, President Donald Trump declared the Covid-19 outbreak a national emergency. Shortly thereafter, the city went into a shutdown and Dyer’s clients canceled one project after another.

“Say Yes to the Dress America.”

Now, less than two years later, she’s the CEO of her own company in a whole new field.

Like many New Yorkers, Dyer, who is from a close-knit family in Brooklyn, New York, spent the next few months cooped up in her one-bedroom apartment. To stay connected, she suggested the family do virtual cooking classes. They were an instant hit. Uncles, aunts, cousins, and nephews were teaching the group of up to 14 family members how to make anything from traditional West Indian dishes to focaccia, Pad Thai, and pesto.

When Dyer proposed that an uncle lead an ice cream–making class, it was quickly dismissed with complaints like, “It’s too much work.” But Dyer didn’t take “no” for an answer. After a quick web search, she bought the necessary ingredients and mixed them up with some ice in a Ninja blender she’d borrowed from her mother.

It didn’t go as planned: The Ninja exploded all over her small Brooklyn kitchen.

‘I was an intern in my own company, trying to figure it out’

Dyer was hooked. She spent the next few months researching everything she could about ice creams, sorbets, ice pops, and popsicle making. Turning to ice cream became her creative outlet.

When she told her family she was going to make it a business, they presented her with a $1,400 check to help pay for her license and LLC. They prayed for her success via Zoom. With that seed money, plus a couple of thousand dollars in savings, Solo Scoop Creamery was born in October 2020.

“Imagine for the past 10 years, you’ve been doing one thing, you went to school, and you learn this, and now you’re in a space where you don’t know anything. I feel like I was an intern in my own company, trying to figure it out,” she says.

“It was hours of research every night. What do I need to do? How do I figure this out? Who do I need to connect to? And the doors just started opening up.”

Getting ready ‘to compete against the big dogs’

While starting and running a business isn’t all new to Dyer, a product-based business is.

Making artisanal ice cream profitable isn’t straightforward, either. Start-up costs are high due to expensive equipment; margins are low, unless you make the ice cream in bulk, which Dyer wants to avoid at all costs; and demand for ice cream is seasonal. Not to mention that giants including Ben and Jerry’s, Breyers, and Haagen-Dazs, as well as smaller brands such as Van Leeuwen and Ample Hills, dominate the $13.1 billion industry.

But Dyer isn’t worried. She says building a brand is mostly about storytelling, a strength she’s drawing on from years of creating visual stories with her work as a stylist. Fun flavor combos don’t hurt, either: Her lychee and pear popsicle has been a fan favorite, and the $5 treats sell out at each event.

“The most important thing with creameries is getting into that freezer space, being able to tap into that grocery market. That’s the hardest part. I’m not ready for that yet,” she says. “My thing is artisanal. It’s convenient in your own neighborhood. I feel like when I get to that space where I have to compete against the big dogs, I’m gonna be ready.

“There’s nothing that’s gonna stop me.”

‘It’s even better to make money’

A year into Solo Scoop Creamery’s launch, Dyer has spent about $19,000 in start-up costs. Between securing a commercial kitchen, experimenting with flavors and offerings, creating a website, and making sure she reaches a loyal consumer base at borough-wide pop-ups and food markets, she’s had her hands full.

In April, she ever so slightly crossed the break-even point with $500 in profit. It was a proud moment. In September, she closed her first year in business with about $5,500 in profit.

I’m very conscious of making sure this is a real business. It’s beautiful to create, it’s even better to make money.

While she says she has a long way to go, she’s celebrating every small win.

“When you’re freelance, you only know how to hustle. You don’t know when your next job is coming, so you figure out how to make money stretch, and that’s what I’m doing now,” she says. “I’m very conscious of making sure this is a real business. It’s beautiful to create, it’s even better to make money.”

Preparing for slow season with styling as a side hustle

Because ice cream is seasonal, Dyer could be facing a few tough months ahead. September was by far Solo Scoop’s slowest month yet. Her ice creams, sorbets, popsicles, and ice-pops are mainly sold at pop-ups and food markets, which are at their busiest during the summer.

For now, Dyer is supplementing some of the loss in income by picking up occasional styling jobs as a seasonal side hustle. She’s determined to see Solo Scoop through to when the weather starts to heat up again — and demand along with it.

Dyer has found a close-knit community of small batch creameries to lean on when the going gets tough. Her parents and extended family are supportive, too.

“When I decided to pivot into ice cream, my parents were like, ‘You’ve proven yourself this far, you’re going to take the risk, you’re not going to listen to anyone else, and we’re just going to support you and encourage you,'” she says. “And I think this is what makes it really special is that I know I have their support no matter what.”