Home Business Biden May Be the Most Pro-Labor President Ever; That May Not Save... 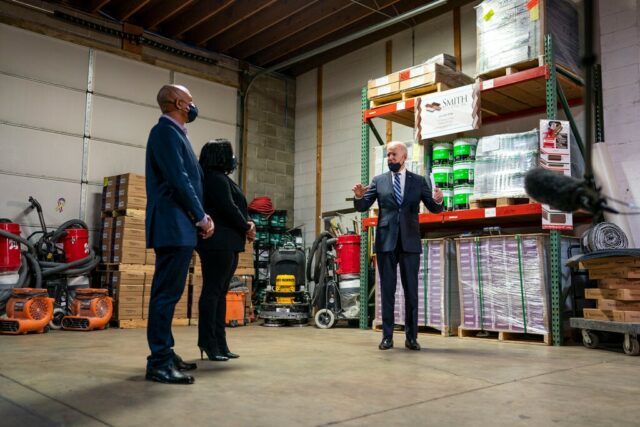 Two months into the new administration, labor leaders are proclaiming Joseph R. Biden Jr. to be the most union-friendly president of their lifetime — and “maybe ever,” as Steve Rosenthal, a former political director for the A.F.L.-C.I.O., said in an interview.

Mr. Biden has moved quickly to oust government officials whom unions deemed hostile to labor, and to reverse Trump-era rules that weakened worker protections. He has pushed through legislation sending hundreds of billions of dollars to cities and states, aid that public-sector unions consider essential, and tens of billions to shore up union pension plans.

Perhaps most notably, the president appeared in a video alluding to a union vote underway at an Amazon warehouse in Alabama, warning that “there should be no intimidation, no coercion, no threats, no anti-union propaganda” — an unusually outspoken move by a president in a standard union election.

Yet Mr. Rosenthal and other labor advocates confess to a gnawing anxiety: Despite Mr. Biden’s remarkable support for their movement, unions may not be much better off when he leaves office than when he entered it.

That’s because labor law gives employers considerable power to fend off union organizing, which is one reason that union membership has sunk to record lows in recent decades. And Senate Republicans will seek to thwart any legislative attempts — such as the PRO Act, which the House passed this month — to reverse the trend.

“The PRO Act is vital,” Mr. Rosenthal said. “But what happens now in terms of Republicans in Congress, the Senate filibuster, is anyone’s guess.”

Until recently, it was far from clear that Mr. Biden would govern in such a union-friendly way. Though he has long promoted the benefits of unions and cited close relationships with labor leaders, the president has also maintained ties to corporate figures like Steve Ricchetti, a counselor to the president who was a lobbyist for companies including AT&T and Eli Lilly. Mr. Biden voted over the years for free-trade agreement that unions opposed.

Then there is the fact that he served as vice president in an administration that sometimes annoyed unions, as when President Barack Obama weighed in on behalf of a school district in Rhode Island that fired the faculty of an underperforming school. Mr. Biden also captained an Obama administration team that negotiated with Republicans over deficit reduction, an effort that raised hackles within labor.

During the 2020 presidential campaign, Mr. Biden’s allies and advisers argued that he had merely acted as a loyal deputy to his boss, and that he would prove more in sync with labor as president.

But for many in labor who had doubts, Mr. Biden has exceeded expectations. Shortly after his swearing-in as president, the White House asked for the resignation of the National Labor Relations Board’s general counsel, Peter B. Robb, whose office enforces the labor rights of private-sector employees.

Mr. Robb was deeply unpopular with organized labor, which viewed him as overly friendly to management. His term was set to expire in November, and presidents of both parties have allowed general counsels to serve out their time in office.

But with no letter of resignation from Mr. Robb forthcoming on Inauguration Day, the White House fired him.

“What was really promising and exciting to those of us who care was the firing of Peter Robb and the dramatic way it came down,” said Lisa Canada, the political and legislative director for Michigan’s state carpenters union.

Yet it is the Alabama video that most clearly highlights the differences between Mr. Biden and Mr. Obama on labor. When state workers flocked to Madison, Wis., in 2011 protesting Gov. Scott Walker’s plan to roll back their bargaining rights, union leaders pleaded with the White House to send a top administration official in solidarity. The White House declined, though Mr. Obama did say the plan seemed like “an assault on unions.”

“We made every imaginable effort to get someone there,” said Larry Cohen, who was then president of the Communications Workers of America and is now chair of the progressive advocacy group Our Revolution. “They would not allow anyone to go.”

By contrast, Mr. Biden seemed eager to offer his statement alluding to the Amazon election, which a number of labor leaders had urged him to deliver.

“We haven’t seen this level of elected support for organizing since Franklin Roosevelt,” said Mr. Cohen, who expected the Amazon statement to discourage anti-union behavior among employers.

Still, Mr. Cohen and other labor officials said that absent a change in labor law, union membership was likely to follow a path under Mr. Biden that was similar to the one it took under Mr. Obama, when the share of workers in unions dropped about 1.5 percentage points. Over all, union membership has fallen from about one-third of workers in the 1950s to just over one-tenth today, and a mere 6 percent in the private sector.

“Because of growing inequality, our economy is on a trajectory to implosion,” said Richard Trumka, the president of the A.F.L.-C.I.O., in an interview. The PRO Act “will increase wages and slow that trajectory,” he added.

Under current law, employers can inundate workers with anti-union messages — through mandatory meetings, email, signs in the workplace — while unions often have trouble gaining access to workers. And though it is technically illegal to threaten or fire workers who take part in an organizing campaign, employers face minimal punishment for doing so.

Labor board cases can drag on for years, after which an employer frequently must only post a notice promising to abide by labor law in the future, said Wilma B. Liebman, a former board chairwoman. There are no monetary penalties for such violations, though workers can be made whole through back pay.

The PRO Act would outlaw mandatory anti-union meetings, enact financial penalties for threatening or firing workers and help wrongly terminated workers win quick reinstatement. It would also give unions leverage by allowing them to engage in secondary boycotts — say, asking customers to boycott restaurants that buy food from a bakery they are trying to unionize.

Glenn Spencer, a senior vice president at the U.S. Chamber of Commerce, criticized the bill as “a radical rewrite of labor law” and said the provision on secondary boycotts could be highly disruptive for their targets.

“Those companies don’t have anything to do with the nature of the labor dispute, but they’re suddenly wrapped up in it,” Mr. Spencer said.

Even with the legal protections envisioned under the PRO Act, however, it will be hard for unions to make large-scale gains in coverage, many experts say. Labor law often effectively requires workers to win union elections one work site at a time, which could mean hundreds of separate elections at Amazon alone.

And the PRO Act’s chances for enactment are remote so long as opponents have recourse to the Senate filibuster, which effectively requires 60 votes to pass legislation.

Senator Jeff Merkley, an Oregon Democrat, appeared before the executive council of the A.F.L.-C.I.O. this month to make the case for exempting certain types of legislation from the filibuster. In a statement after the meeting, the council members called for “swift and necessary changes” to Senate rules to remove the filibuster as an obstacle to progressive legislation.

Mr. Biden has since indicated that he is open to weakening the filibuster, though it is not clear whether the PRO Act would benefit.

Mr. Trumka said he was confident that Mr. Biden would seize the opportunity that Mr. Obama had let pass when Democrats enjoyed a large Senate majority but still failed to change labor law. “This president understands the power of solving inequalities through collective bargaining,” Mr. Trumka said.

But others are skeptical that Mr. Biden, for all his outspokenness on behalf of unions, will be in a position to deliver.

“The proof is in the pudding,” said Ruth Milkman, a sociologist of labor at the Graduate Center of the City University of New York. “We know where his heart is. It doesn’t mean anything will change.”

Howard Baketon - January 22, 2022 0
The first computer games were developed in the late 20th century with the sole purpose of entertaining their audience. One of the first goals...

Citi asks vaccinated staff in New York to report to office from Feb. 7...

Two years since Covid was first confirmed in U.S., the pandemic is worse than...

Who Writes the Story of the Metaverse?

Allbirds targets a more than $2 billion valuation in upcoming IPO

Cramer: Charts suggest inflation may cool down faster than expected, boosting stocks in 2022

Hollywood crews will strike on Monday if new contract deal is not reached with...