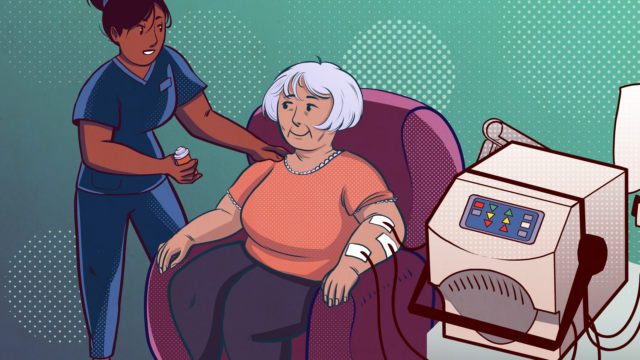 When Warren Buffett buys big into a stock, and keeps buying, it’s typically a sign that the billionaire investor thinks a company has close to monopoly-like power over some market. That’s the case with kidney care company DaVita, which Buffett’s Berkshire Hathaway started buying several years ago and in which it now holds a stake worth well north of 30%. DaVita is among a handful of companies that dominate the market for kidney care and dialysis. But big incumbents will also attract the attention of disruptive start-ups, sometimes starting out from with their own ranks.

Somatus, a kidney care provider, was co-founded by former DaVita executive and doctor Ikenna Okezia, who is its CEO. Since 2016, Somatus has been building a network that works with health plans and provider groups to lower the cost of kidney care, using locally-based providers and in-home care for patients.

The existing approach built by companies including DaVita relies on the physical infrastructure of bricks-and-mortar dialysis centers. With the heavy investment that went into building this system, start-ups see an opportunity in new, less real-estate intensive models.

Globally, there as many as two million people suffering from kidney failure, and the disease is increasing by 5% to 7% a year.

In the U.S., specifically, kidney disease affects 15% of the U.S. adult population, over 37 million people, and disproportionately is suffered by the Black population and low-income Americans. This has led to criticism that the system has been allowed to remain as it is, in part due to the nature of the patient population. It’s a claim made by Andy Slavitt, former managing director of The Centers for Medicare & Medicaid Services under President Barack Obama, who has invested in several companies in the kidney care disruptor space through his VC firm Town Hall Ventures, including Somatus. He was previously on the Somatus board.

According to critics, kidney care falls into the frustrating health care category of high costs and questionable outcomes. For severe cases, the price tag for dialysis is steep, with end-stage kidney disease patients paying as much as $15,000 per month, according to a recent study. The 750,000 Americans who live with kidney failure represent 7% of Medicare’s budget, with dialysis costing Medicare $90,000 per patient annually, a total running into the tens of billions of dollars.

As the status quo, high-cost incumbents are targeted, Somatus is in an increasingly crowded field of new companies in the kidney care space, which includes Strive Health, Cricket Health and Monogram Health. And the Somatus founder isn’t the only member of the “DaVita mafia” coming for their former employer.  Strive Health was founded by two former DaVita executives. DaVita and its peers including Fresenius are aware of the changes taking place in the market and are making their own investments in new approaches.

Somatus continues to secure new capital from investors and notable health-care market deals. In February, it raised over $325 million in a Series E funding round at a valuation of over $2.5 billion, with investors including Wellington Management and Fidelity. In November of last year, Anthem made a strategic investment in Somatus, and announced a long-term, multi-year partnership to expand the company’s geographic footprint, which is expected to reach 35 states and 150,000 patients this year across Medicare, Medicare Advantage, Medicaid, and commercial plans.

Sign up for our weekly, original newsletter that goes beyond the annual Disruptor 50 list, offering a closer look at list-making companies and their innovative founders.

Hackers can bring ships and planes to a grinding halt. And it could become much more common

Crypto Market Chaos: No, Lido Is Not ‘the Next Terra’