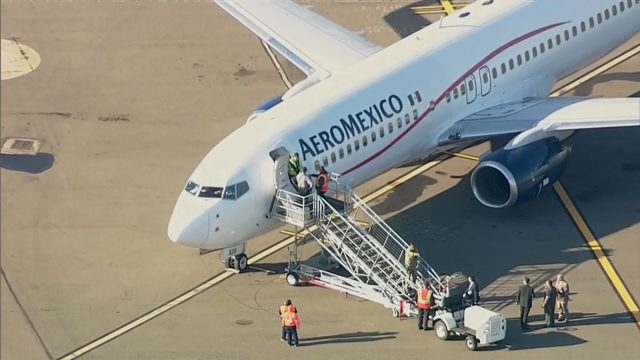 SAN FRANCISCO — Two travelers on an Aeromexico flight were kept Thursday and others called 911 to state they were being held without wanting to as the plane sat for quite a long time on the landing area at Oakland International Airport, authorities said.

Flight 622 from Guadalajara was booked to arrive at San Francisco International Airport however was redirected because of haze and arrived at Oakland at about 10:30 a.m., air terminal representative Keonnis Taylor said.

The plane sat for around four hours. Travelers griped that for a great part of the time they had no cooling and gotten no nourishment or water. Some called 911 to report they were being held without wanting to, as per the Alameda County Sheriff’s Office.

Sheriff’s units additionally reacted to reports of a wild traveler who was compromising to open the crisis entryway exit as the flight group attempted to stop him, Sgt. Beam Kelly said.

That man and another traveler were confined for meddling with a flying machine and flight team however in the wake of conversing with the men, they were permitted to leave without being captured, as indicated by the Sheriff’s Office.

One lady who said she experienced difficulty breathing was given oxygen and taken to a healing center.

Travelers were at last permitted to make a beeline for the terminal Thursday evening.

Oakland air terminal said in an explanation that it is a carrier’s choice whether to anticipate leeway to come back to the first goal or let travelers deplane at the preoccupation air terminal.

Aeromexico said in an explanation that it has no Oakland activities and required unique approval from air terminal experts to land travelers.

Electric vehicles are in short supply. Here’s what you can find as gas prices soar

PayPal stablecoin: What it could mean for payments