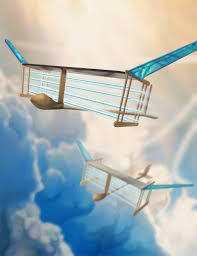 Thanks to some MIT scientists, aircraft are boldly going where no aircraft has gone before.

According to India Today, the aircraft’s in Star Trek have inspired the scientists to build and fly the first-ever plane “with no moving parts” with the idea of creating a “quieter, simpler aircraft with no combustion emissions.”

The airplanes we know today (and have generally ever known) have “flown with the assistance of moving parts, for example, propellers, turbine blades, and fans.” The pieces are altogether controlled by the “ignition of petroleum derivatives or by battery packs that deliver a persevering, whining buzz.”

This new airplane is powered by “ionic wind,” which is described as “a silent but mighty flow of ions, which generates enough thrust to propel the plane over a sustained, steady flight.”

Currently being referred to as “Version 2 EAD Airframe” or “V2,” the aircraft weighs about 4.4 pounds has has a wingspan of about 16.4 feet. One of the biggest appeals of this new design is that it’s “completely silent” and “does not depend on fossil fuels to fly.”

Steven Barrett, MIT aerospace engineer, says they still have a long way to go in perfecting the design. He doesn’t know if the aircraft will be “practically useful and widely used,” but he is hopeful it will have a promising future.

“I don’t know whether you’ll see a large aircraft carrying people anytime soon,” he says, “but obviously I’d be very excited if that was the case.”

Barrett is especially eyeing altering the dynamics of drones, which he believes would be more appealing without the noise pollution. “I’m trying not to over-sell it,” he said, “but there are some really exciting possibilities here.”

The main inspiration for this creation is the Star Trek shuttlecraft, which is the auxiliary craft typically seen attached to a starship or starbase within the Trek universe. There are many different iterations of the shuttlecraft in the many different iterations of Star Trek, but they’re almost all “short-range transports with limited warp capability.”