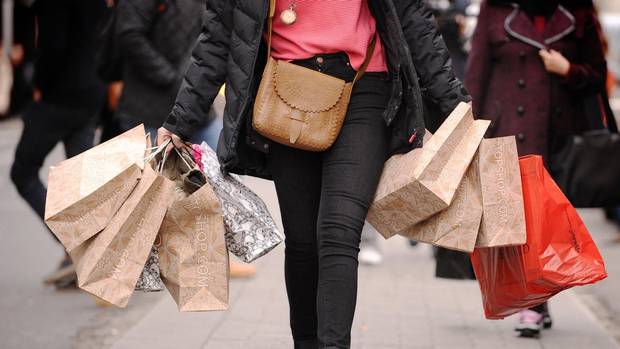 Customers are deserting their local communities and sports teams when they shop online or travel North, small businesses have warned.

Today has been branded ‘Small Business Saturday’ as retailers battle back against the frenetic commercialism of Black Friday and Cyber Monday.

The Small Firms Association (SFA) urged shoppers to support businesses in their own communities this Christmas and stressed that if every adult spent just €20 extra locally, they would have a €73m boost.

The plea came as a new report warned that small-town Ireland is facing a “perfect storm” of challenges which threatens to rip the heart out of the traditional main street.

Justin Hanley, of Hanley’s Gift Shop in Fermoy, Co Cork, said people needed to remember the role local businesses play. “The message is that small businesses support the towns, villages and cities in which they operate – so people should support these businesses in return,” he said.

“Our strong economy and rising employment rates across the country will raise consumer spirits and enable greater spending power over this year’s busy Christmas shopping period,” he said.

“If each adult spent just €20 extra in small businesses this Christmas, this would have a huge, positive impact on local jobs and the vibrancy of town and village centres.”

The SFA campaign came amid mounting concern over the impact Black Friday and online sales are now having on small to medium scale retailers – as well as major high street shops.

Internet sales this year are expected to be up by 5pc on 2017 levels – and worth more than €16bn.

Online spending will have doubled since 2013.

Pinocchio’s Toys director Christel Stansfeld said there had been a visible recovery over the year in Irish consumer confidence and spending.

The family-run toy shop, operated by Christel and her husband Wyon, said there had been a definite increase in consumer spending over 2017/18, with many small traders hoping for a strong Christmas to end their season.

“We have found that while the overall number of people purchasing goods might be the same, they are now able to spend more on individual items,” Ms Stansfeld said.

She stressed that quality, service and the uniqueness of products offered a vital edge over online sales.

Director of Retail Ireland Thomas Burke pointed out that online shopping was by far the fastest growing retail channel.

However, while online shopping has surged, it was estimated that more than 90pc of purchases were still in shops.

Mr Burke said retailers were optimistic of a good Christmas despite the growth in online buying.

Finbar Cotter of Newbridge Silverware, Cork, said traders could compete with online shopping given a level playing field: “It we have the footfall of shoppers in villages, towns and cities, Irish traders will more than hold their own.”

But he warned that issues such as car parking, access and localised car bans, such as that introduced in Cork, were having an impact.