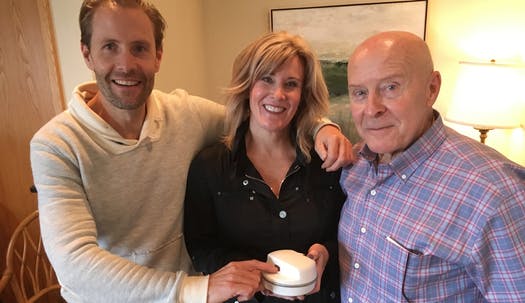 Tom McMullen was a traveling sales representative who turned into a business agent during the 1970s to be nearer to his young family.

He brought home the bacon and delighted in the work at his financier, McMullen Midwest. In any case, he since quite a while ago harbored a craving to dispatch his own firm to create Minnesota-made products for the disabled.

His younger sibling had polio during the 1950s. McMullen would raise her on a table and help with her activities.

“Twice a day for years,” McMullen recalled of the workouts before and after school.

While dating his future spouse, Trudy, during the 1960s, McMullen saw that she strolled with a limp. He figured it may have been from youth polio.

Trudy McMullen, however, had a tumor in her spine that extended in her 30s. She lost portability and burned through the vast majority of her most recent 20 years in a wheelchair. Tom McMullen quit his business work with Olympic Stain in 1976. He expected to help with their three children, all under 10, at the time.

This fall, McMullen started offering the principal result of his “new business,” 35 years after he began tinkering at the kitchen table.

His three grown-up youngsters recall the early draws, research and thoughts that went into what has progressed toward becoming ClipDifferent, an elective fingernail scissors that is less demanding to use for those with joint inflammation, constrained vision, and other adroitness challenges.

“Who could ever have spent 35 years, off and on, learning about the fingernail business,” quipped McMullen, 75, a fit, positive thinker who likes to poke fun at himself. “But if I didn’t do this, who would? I think I know more about nail clipping than anybody.”

McMullen has invested more than $500,000 over the years, from research to prototypes and patent applications. He raised $450,000 this year from individual investors to finance inaugural production, marketing, shipping and related costs.

A simple nail clipper costs only a buck or two. The ClipDifferent Pro nail clipper sells for $149. It’s targeted at millions of U.S. consumers who can’t clip their own nails or who just want an automated way to finely clip nails. A nail job at a salon can cost up to $30, including polish.

One of McMullen’s first deliveries this fall was to Chuck Shortridge, a retired Small Business Administration counselor who worked with McMullen a decade ago. Shortridge has lost his sight over the years.

“I thought Tom was an interesting person with an interesting idea,” recalled Shortridge. “Now, he has a good, very useful product, employees and a plan. He’s persistent. He’s got it set up right.

The ClipDifferent Pro, sold online at ClipDifferent.com and Amazon, uses a rechargeable battery to power a blade into which the fingernail is inserted through a slot and precisely trimmed to users’ desired length, capturing the trimmings in a tiny drawer.

“Being able to do things for yourself makes all the difference in the world,” customer Ruth Bachman, who lost a limb, said in a statement.

McMullen is flanked by a management team of four, including daughter Melanie McMullen, a marketer, and son T.J. McMullen, 47, an IT guy.

ClipDifferent is forging partnerships with groups that support the disabled and veterans, as well as the elderly. It has received favorable reviews in related publications.

Moreover, ClipDifferent was a semifinalist in the recent Minnesota Cup competition. And it has been nominated for the Edison 2019 Best New Product Awards. The Edison Awards recognize “excellence in human-centered design and innovation.”

McMullen didn’t set out to just create a gadget. It’s rooted in his relationship with his sister and late wife. Trudy McMullen encouraged her husband, who grew up in a family manufacturing businesses, to keep working on a different kind of nail clipper when he wasn’t peddling a business.

“She would wheel in any room and it would light up,” McMullen recalled. “She was an inspiration. And nobody could touch her wheelchair. She wanted to do it herself. But I was her scout and helper. We made the house as accessible as possible.”

McMullen, a born tinkerer and salesman, started his one-man mergers-and-acquisitions brokerage after he helped an acquaintance sell a truck and its route in 1975.

He did multiple, much larger, transactions for companies, including J&E Manufacturing and Multisource Manufacturing.

He built a comfortable life for his family. And kept tinkering with ClipDifferent.

His current wife, Patricia, has also encouraged his side project, he said.

Earlier this year, as production and distribution neared for the inaugural order of ClipDifferent, McMullen stepped away from McMullen Midwest, leaving it to his partner and oldest daughter, Melissa, 51.

Now he’s all in on fingernails.

“Success for me will be the people who use ClipDifferent,” McMullen said. “I could see this being a $15 million to $20 million company. I don’t know how much money we’ll make. I’m aware we have to cover expenses and invest in the business.

“And my wife and I have enjoyed giving the product as gifts to friends and those who need them.”

Failure is not an option for glass-half-full Tom McCullen.

“The risk will be not being able to keep up with demand,” he said.